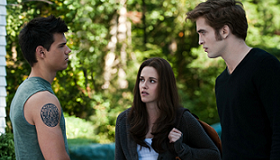 Fans feuding over Team Edward and Team Jacob can put down their fangs. After Eclipse, both fans will convert to Team David Slade. The first-time-to-the-franchise director combines his experience with violent vampires (30 Days of Night) and impassioned teen girls (Hard Candy) to create the series' most balanced and fun vam-rom-drama. Twihards will embrace it as the first installment to live up to their imaginations (which, frankly, have always been better than either the movies or Stephenie Meyer's prose) and Summit can breathe easy that the saga of Bella Swan still has momentum going into the fourth and fifth (and final) flicks.

Slade's challenge is to navigate a novel that leaps from blood to tears, from a newly made bloodsucker (Xavier Samuel) slaughtering Seattle to Bella's (Kristen Stewart) literally eternal love triangle between Robert Pattinson's clenched-jawed sparkle-vamp and Taylor Lautner's huggable werewolf. Eclipse is about extremes: it opens with a vampire attack, then cuts to Stewart and Pattinson snuggling in a meadow reading Robert Frost's "Fire and Ice," a metaphor for the choice she has to make between warm-blooded wolves and the ice-cold undead. If tweens miss the symbolism, it's repeated in every other scene. (The best is when Lautner snipes, "Let's face it, I am hotter than you.")

Eclipse has its cheesecake and eats it, too. Like New Moon, it's heavy on topless shots of barely legal Taylor Lautner, but now Pattinson grumbles, "Doesn't he own a shirt?" It's winking melodrama that lets fans smile and critics snort with glee.

Not much happens in Eclipse. In their first scene, Pattinson and Stewart have this exchange: "Marry me." "Change me." 100 Minutes later, they're still having the same conversation, but Slade doesn't let the emo inertia drag. Since his leads are still more mannequins than actors, he physicalizes their emotions: Pattinson furiously peels out of parking lots, Lautner-in wolf form, as big as a horse-charms Stewart into petting his fur.

Though the first half hour struggles to shake off the dour New Moon vibes, this is likable fluff, junk food without regret. Reluctant boyfriends have a few minutes of the wolf pack's bros-before-emos tumbling. Reluctant chaperons will be happy that all of the adults note that Bella and Edward's romance is too obsessive. Reluctant history buffs will delight in the Civil War era reenactments. (Okay, that one's a stretch.) And conservative abstinence advocates will thrill at a teen flick where the guy wants to wait for marriage. As he tells his hot-and-bothered girlfriend, he comes from a different culture of front porches and lemonades with the family. Can he be a 109-year-old virgin? Teen abstinence group True Love Waits: have I got a poster boy for you. And trust me, he makes the ladies swoon.