close
Three is the magic number 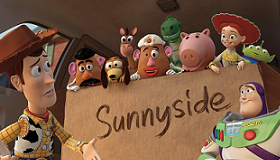 Woody, Buzz and the gang are back on the screen and that's cause for major celebration for moviegoers—it'll also be cause for celebration for theater owners who'll be counting huge box office returns all summer long, and we're not talking toy money here. Disney/Pixar has again come up with the best Toy Story ever—more laughs, more heart, more fun, more toys and all in stunningly well used 3D. What more could audiences want from a movie than this hilarious, heartwarming entertainment for all ages? If you think this summer has gotten off to a lukewarm start, you can count on Pixar (as usual) to come in and save the day with this wonderful and unforgettable movie experience.

Eleven years since the first sequel in 1999 (and fully 15 years since 1995's landmark Toy Story) Pixar's franchise has lost none of its charm or punch. Opening with a wild and woolly action sequence that takes place in the mind of young Andy (John Morris), the story quickly moves forward in time to reveal Andy is now heading off to college and his mother (Laurie Metcalf) is insisting he clear out his room of all the old toys which, with the sentimental exception of cowboy Woody (Tom Hanks), will be stuffed into a garbage bag meant for the attic. Mom mistakes the bag for trash, sending the characters on a near brush with toy death, before finding safe harbor in a day care center. The toys initially relish their new home and new playmates, unfortunately the day care students are the toddler equivalents of water-torturing terrorists and the place is run by a tough-as-nails bear named Lotso (Ned Beatty) whose slow southern drawl belies his mob boss persona. Using Buzz Lightyear (Tim Allen) as his brainwashed lackey, Lotso and his cohorts, including a truly weird Big Baby, wreak havoc on the new arrivals that must find a way out and back to the life they once cherished.

Director Lee Unkrich working from his story co-written by John Lasseter, Andrew Stanton and shaped by screenwriter Michael Arndt (Little Miss Sunshine) is not afraid to go to darker places this time, emphasizing the abandonment issues of Toy Story 2 and taking them further into old age and self-esteem issues. Still the Pixar geniuses manage to continually milk inventive and funny gags at every turn, mixing them effortlessly with great heart and soul. For this edition the action/adventure quotient has been ratcheted up a few notches to summer movie levels, particularly in the last half hour when all heck breaks loose.

Although Lasseter won a special achievement Oscar for 1995's Toy Story, the animated feature Oscar category wasn't in existence for the first two films, but with the truly awesome Toy Story 3 firing on all cylinders expect this one to become an instant frontrunner and without question the movie to see this summer.