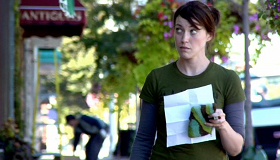 Frank Ross' newest film, Audrey the Trainwreck, is at once utterly down home and completely philosophical. Struggling with the day-to-day of his middle-management existence, Ron (Anthony Baker) looks to his father's resigned aphorisms to make it through the week: "The only thing easier than fucking up is apologizing for it." It's ironic this wisdom is about rising to an occasion, when the majority of Ron's life seems dedicated to finding a quiet rhythm and preserving it. Chicago based production features a handful of mumblecore regulars (Joe Swanberg of Nights and Weekends and Jess Wexler of Teeth and Alexander the Last) but the film itself boasts fewer aesthetic statements than existential ones. A short run at Brooklyn's new ReRun Gastropub Theater begins Friday July 23, but the film currently has no official distributor. Smart booking agents and distributors should court: Ross is an under-recognized voice for his generation with a reputation for making incisive films about the working class and issues of adulthood. His work will speak to many--provided those many have a way to see.

Ron's a middle manager at a company that sells ATM parts. He hates his job but is reluctant to admit it. Everyone wants to commiserate with him over beer and he'll drink the beer but he's not so interested in complaining; doing so would break with his otherwise consistent malaise. On the weekends he goes on a series of empty dates, presumably he finds the women on matchmaking sites. The women in these scenes are basically the only women that populate the film, and they're an eclectic parade of motivations in conflict. One girl is so gorgeously needy and desperate to be interesting she makes a rabbit puppet out of her napkin (it's a fairly cute trick, actually), another runs to the date because her car was destroyed within feet of a "leave your car here at your own risk" sign. On one date Ron meets Staci (Alexi Wasser), a delivery driver who seems perpetually on the outside of things. Date two leads to date three and dinner at her place. Things seem to look up for Ron, even if the world isn't ceasing its chaotic hold on him at all.

It's fairly beautiful that the film has no actual character named "Audrey," and while it has one train, there is no literal trainwreck. It's clearly about big, abstract subjects like fulfillment, happiness and class, but the point seems to be that the nature of all of these ideas is illusive while our daily grind is as literal as it is inscrutable; in the face of this dichotomy it's almost shocking we can put words to principals so nebulous. What the hell is "adulthood" anyway? This irony is laid out for us in the film's first scene, when a game of darts (as in, that game where you throw pointy arrows at a bull's-eye) goes so wildly awry the protagonist ends up in an emergency room. There, the inability to hit a predetermined mark was rather detrimental. After Ron's admitted to the ER (with dart protruding), he asks his roommate to pick him up and en route the roommate's car has a blow out. Over the sight of this event, happening in the cover of night, we see the film's subtitle, "These Things Happen in Threes," and so we spent the film waiting for the third shoe to drop. It does, just when you think the world makes sense and order and meaning are real--and that final shoe, by the way, lands accidentally and precisely on target.