close
Able to disappoint children of all ages 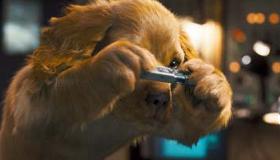 Warner Bros. 3D family comedy Cats and Dogs: The Revenge of Kitty Galore might exists solely to test the longstanding premise that kids will embrace bad movies so long as the film's core concept is appealing to them. Kitty Galore is a surprising sequel to the 2001 comedy hit Cats & Dogs (that film opened at number one and went on to earn $93 million domestic). But it's been eight long years since the original saw theatrical audiences and whatever brand recognition the popular film enjoyed in 2001 has long since faded. The tale of spy dogs teaming up with a secret agent cat to capture a rogue feline agent named Kitty Galore is plenty cute, but the latest co-production from Village Roadshow Pictures and Warner Bros. fails to deliver enough clever gags, emotional warmth, or eye-popping 3D to compete with recent family releases.

There are few solid laughs in the movie courtesy of screenwriting team Ron J. Friedman & Steve Bencich (Open Season), as when we see cats lounge around a cluttered living room high on catnip, or watch a box of cat litter turn into a deadly trap. Animatronic effects by David Barclay involve sight gags featuring dogs that can operate stick shift pods. Production Designer Rusty Smith pays homage to veteran James Bond designer Ken Adam with an underground HQ that resembles a sleek dog dish. Both the sets and the effects outshine the surprisingly flat 3D throughout the movie.

Two clever nods are offered to the parents in the audience: Shirley Bassey sings a version of Pink's "Get The Party Started" over the opening credits in a style resembling her performance singing the Goldfinger theme; and Bond veteran Roger Moore plays the feline head of the cat spy agency.

O'Donnell sleepwalks through his performance as a San Francisco cop, and even though Nolte's gruff voice is well suited to portray an old dog named Butch it's all embarrassing just the same. Only the animal actors and Bette Midler, so funny as the crazy Kitty Galore, emerge with their integrity intact.

With chances of any crossover or repeat business unlikely, Kitty Galore will rank with another Warner Bros. underperformer, Jonah Hex, which ensures that Cats and Dogs 3 is unlikely except for a straight to DVD feature.

For Peyton, who is attached to the Journey to the Center of the Earth sequel, his missteps on Kitty Galore are proof that kids comedy still requires quality storytelling and engaging lead performances to be successful.

In fact, Kitty Galore's best laughs occur during the Looney Tunes pre-show cartoon Coyote Falls. Its 3D is fast and furious and the slapstick is clever. The cartoon short has everything Kitty Galore desperately needs. Too bad the Looney Tunes writers didn't help out with the feature presentation.