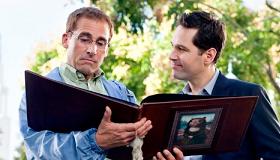 Jay Roach, director of Meet the Fockers, delivers another comedy of discomfort, this time based on Francis Veber's 1998 French comedy The Dinner Game. Resemblances to Blake Edwards Blind Date are evident, if not completely intentional. Tim (Paul Rudd) in his panic to create a more financially sound future for the woman he'd like to marry, sells his soul to the demons who run his office. When a high-profile crony is fired, he devises a savvy plan to cannibalize the ex-employee's post, but the higher-ups are more than just money hungry and offer him entrance in their inner-sanctum only if he participates in a cruel dinner party contest. Each employee is meant to bring a bizarre and embarrassing character to the table in hopes of crowning their freak the biggest loser; all this ridicule is transmitted by sniggers and sidelong glances, of course, so that the well-heeled finance managers don't let the "rules of the game" go public. Roach is particularly well suited for this brand of situation comedy and offers up some great moments, but the film also has sections that suffocate under their own weight, as when ensemble scenes feature too many plot misunderstandings and characters go in too many directions at once. Still, more than a few brilliant comic showdowns occur and that alone should seal some box office securities.

Tim (Paul Rudd) works in a world of high finance and low moral-fiber. His girlfriend, gallery curator Julie (Stephanie Szostak), maintains her down-to-earth-ness though she works with absurdly self-absorbed artists in a context that champions transgression ("Have you ever had your arm inside the vagina of a zebra?"). Tim, however, doesn't seem able to work in this world of compromise without selling out completely. When a promotion is contingent upon a dinner party to which he must bring an idiot to be ridiculed, it becomes clear that following the rules further will be a deal breaker for Julie, and for his own sense of decency. Steve Carell as Barry, Tim's possible idiot for the night, wins all the film's big laughs. It's hard to imagine that anyone could beat out Carell for sheer commitment but two comic tête-à-têtes, one with Jemaine Clement as Julie's unwieldy artist and the other with Zach Galifianakis as his wife-stealing manager, are swimming in comic chemistry. Each comic plays it so strong that "over the top" ceases to hold meaning. The climactic dinner party attempts to set straight some of the cruelties of the premise, maybe so we can walk away feeling less like meanies for watching, but gratefully doesn't bleach the situation of all its moral complication.

In sum, the film is not without its sweetness. Carell's Barry retells the story of his life in dioramas populated completely with costumed, stuffed mice. While the legacy of taxidermy is pretty gross (and never far from the memory of Norman Bates), mice dioramas are quirky synecdoche for Dinner for Schmucks; while it all skates close to gross, it's still somehow quite dear.