close
A celebration of cinematic excellence that suffers from ADD 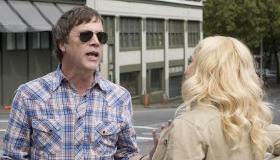 Great Directors is a documentary about noteworthy filmmakers for the hyperlink era. First time documentarian Angela Ismailos has interviewed ten noteworthy international directors about their art, and then cut them together by skipping back and forth between their voices like an iPod in shuffle mode. Ismailos is a woman of mystery if my Google skills are worth anything; her "Great Directors Cannes Yacht Party" got a rave from Variety for its "yummy food, wine, music and dancing," which is an odd factoid for those of us who think of the first time documentarian as a figure who traditionally lives from hand to mouth. Ismailos has impeccable taste, though; cinephiles are the obvious audience for this, though they are also likely to feel Great Directors defects most acutely, which may divide an already limited audience.

There are numerous well-chosen film clips, many of which communicate the sense of wonder Ismailos apparently gains from her directorial influences. But in the end, Great Directors is about as organized as the average Facebook "Favorites" tab, and the sprawling number of filmmakers featured becomes incoherent without Ismailos providing some sort of strong organizing principal beyond the fact that, well, these people are just so great.

The filmmakers featured are, in alphabetical order: Bernardo Bertolucci, Catherine Breillat, Liliana Cavani, Stephen Frears, Todd Haynes, Richard Linklater, Ken Loach, David Lynch, John Sayles and Agnes Varda. The deeper your knowledge of people like Lynch, Frears and Varda, the more frustrating this movie can be. Lynch, for example, is represented by copious clips from his films, but has very little to say about them, beyond the fact that he doesn't like to talk about his movies. This is fine and even fitting for a director who frequently seems to be trying to replicate the workings of the subconscious mind. But Ismailos accepts this statement at face value; despite inserting herself into the documentary to an at times humorous degree, she never grapples at a deep level with her own responses to Lynch's moviemaking, and so we have no real sense of what he means to her, and therefore why he's here.

Frears is a far more illuminating interviewee, but Ismailos lets him get away with murder. Like Ken Loach, Frears is a product of the British social realist approach to cinema, with its focus on class, economics and leftist politics. Frears ran off to Hollywood in the '90s and made millions directing lumbering star-driven monstrosities like Hero and Mary Riley. He purges himself of his guilt over this, and then Ismailos plops clips from The Queen onscreen as an example of a return to British topics and early form. As fine a film as The Queen is, it never even occurs to Ismailos to ask Frears what an old lefty radical meant by celebrating the single stodgiest institution in British culture, if not the world's.

Varda, who at 80 plus years of age exudes a twinkling and grandmotherly charm, has done such a fine job of chronicling herself in recent efforts like The Beachs of Agnes and The Gleaners and I that Ismailos' Cook's Tour approach seems particularly egregious in dealing with her. Varda has made on the order of 50 movies; a viewer of Great Directors could be forgiven for thinking that her 1962 international breakthrough Cleo from 5 to 7 was a random highlight in an otherwise productive but easily dismissed career.

Add in incessant linking shots of Ismailos walking through European landscapes trying to look both thoughtful and glamorous, plus some conversations with Sayles, Linklater and Cavani that are more like sound bites than interviews, and you get some sense of Great Directors shortcomings. Still, there are moments-especially when the filmmakers talk about each other or key figures in their own creative lives-when Ismailos does manage to convey the sense of a grand and ongoing conversation across time and space that she's going for. Bertolucci is especially moving when he talks about his mentor, Pier Paolo Pasolini, and Lynch's list of directors he admires (which includes both Hitchcock and Fellini) is perhaps the single most enlightening key he's willing to give us to the harrowing surrealism of his work.

Ismailos is to be commended for the perseverance that undoubtedly enabled her to create this movie. It's flawed, but it beats the veiled promo films we usually get about the inner workings of cinematic creation. If she sends you a friend request, my advice would be to accept. Who knows? You might even get a yacht party out of it.