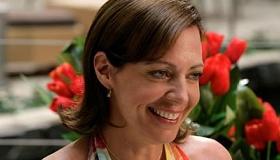 In Life During Wartime writer/director Todd Solondz continues mining the deadpan dysfunction of the family from his 1998 film Happiness; along the way he weaves in characters from his other films, as well. Using different actors than those from his earlier works, Solondz has assembled a game cast ranging from Charlotte Rampling to Paul ("Pee-wee Herman") Reubens. While this film has the trademark Solondz black comedy, it does not probe into deeper emotions as successfully as Happiness did. Solondz's name and the eclectic acting ensemble should draw a moderate arthouse audience, but this film will lack the critical acclaim and word of mouth of Happiness, which remains Solondz's best film to date.

Joy (Shirley Henderson, the Harry Potter series) spends the film searching for what she has ironically been named. She often dines out with her husband, Allen (Michael Kenneth Williams, The Wire), who likes to tell her about his never-ending struggle to reform. Allen is the same character Philip Seymour Hoffman previously portrayed in Happiness, but in this incarnation Allen is black. His past includes crack cocaine and armed robbery, and when he asks a waitress to tell him about the restaurant specials, she contemptuously recognizes his voice because he has a history of making obscene calls. This new cast seems to help Solondz reconsider the characters he created in previous stories.

Both Henderson and Williams fit into the dark Solondz world by skillfully speaking in serious, measured tones, while discussing extreme activities. Devastated that Allen has continued his old habits Joy flees to her mother (Renee Taylor) and sisters, who have their own problems. The spirit of a dead admirer (Reubens) periodically visits her.

Joy's sister, Trish (Allison Janney, Juno), is hiding the biggest secret: her husband, Bill (Ciaran Hinds, There Will Be Blood), has been imprisoned for pedophilia. This "situation" was a focal point of Happiness. Trish has told her two youngest children that their father had died. Janney is very amusing as Trish, whose persistent cheerfulness hides multiple family problems that include an over-medicated, young daughter. The bright colors of her home decorations and the outside Florida locations (filmed in Puerto Rico) are a counterpoint to the disturbing situations the characters encounter. Released from prison, Bill tries to establish contact with his oldest son Billy (Chris Marquette), now away at college. Trish becomes attracted to Harvey (Michael Lerner, Barton Fink), hoping he could bring stability to her fatherless family. Harvey and his son, Mark (Rich Pecci), were characters in Solondz's Welcome to the Dollhouse and Mark was also in Palindromes. Joy makes a short visit to Helen (Ally Sheedy), the successful third sister who lives in Los Angeles.

The screenplay is full of clever dialog that brings humor to some weighty and often bizarre or sinister events. With so many characters crowded into a relatively short running time, some actors appear too briefly to make a significant impression. Even though the film does not get beneath the surfaces of the characters, the unusual plot lines and a group of distinctive performances keep this Life intriguing.