close
Imperfect but worth it 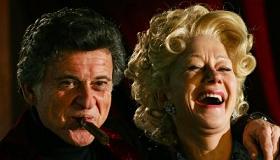 Despite a two year-long, financially troubled production history with the beleaguered Capitol Films, Love Ranch is finally coming to theaters. Director Taylor Hackford's story of an unusual love triangle set in the 1970's against the conflicting arenas of boxing and Nevada's first legalized brothel is bound to attract summer 2010's seriously neglected adult audiences. Love Ranch proves to be a provocative, highly entertaining and surprisingly touching peek into a unique world movies don't often explore. Anchored by another terrific performance by Helen Mirren who lets loose as the Queen of the Brothels, the film will open in six markets and expand in July. It could find some box office success with the older movie going audience to which it is targeted but may find itself in a tough fight for attention during a brutal summer season. DVD release and cable runs are where most of the bucks are likely to be made.

"Inspired" by true incidents, Love Ranch is actually a very thinly fictionalized story of events from the lives of Joe and Sally Conforte, owners of Reno's Mustang Ranch, the focus of Nevada's legalized prostitution industry in the '70s. At the same time the ranch was developing Joe went into the boxing business, managing Argentinean sensation Oscar Bonavena, who would later turn up dead on the ranch. All of those facts turn up in writer and journalist Marc Jacobson's sometimes-melodramatic script which uses the milieu of boxing and brothels to form an unusual "romantic" triangle between the three main characters, here renamed Charlie Bontempo (Joe Pesci), his wife Grace (Mirren) and boxing star Armando Bruza (newcomer Sergio Peris-Mencheta).

Charlie is a cheat in many ways, personally and professionally, but Grace has managed to put up with him over the years and is even complacent in his dirty business dealings. She keeps two separate accounting books (only one with real numbers) and runs their brothel in a no-nonsense style, overseeing an ever-growing number of girls (of various types) who make up the ranch's key personnel. Secretly, Grace is made aware that she has cancer and has only six months to live. While Charlie is pre-occupied with his new business, Grace looks for some sort of human connection in her final days and takes up with Bruza. The two form an unusual but warm relationship no one saw coming, which causes ultimately tragic complications.

Having produced the brilliant prizefighting documentary, When We Were Kings, Hackford proves to be a boxing aficionado and brings a sense of authenticity and urgency to the film's vividly detailed fight scenes that are among key highlights. The other saving grace is Mirren (Hackford's real-life wife) who is incapable of a false note and proves her worth in a moving performance as a tough but emotionally vulnerable broad whose strong demeanor and smarts ironically define the core of a feminist movement just taking hold. While casting Pesci as her husband and business partner might seem odd, the two consummate pros play well off each other as Pesci devours another F-bomb spouting, cigar-chomping character with typical color and verve and is great to see back in a leading role. Spanish actor Peris-Mencheta is fine and physically impressive, believable in the ring-and out. Among the large cast of "girls," Scout Taylor-Compton as an ingénue and Gina Gershon as the grizzled vet deserve special mention.

Although it may not be everyone's cup of tea, if you want to take a wild trip back to the uninhibited '70s, when hard livin' and lovin' came at a cost, this is your movie.