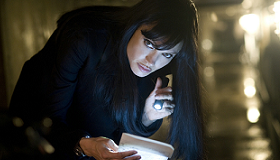 With Russian spy swaps suddenly in the headlines , you would swear Columbia Pictures had a direct line into the White House for their marketing plan on the new action thriller Salt, but the timeliness of current events only makes this sizzling hot, explosive and nail-biting ride all the more pertinent. With Angelina Jolie on the run as a CIA agent accused of being a "sleeper spy" for the Russians we have the ingredients for a summer potboiler that Bond and Bourne together can't match for non-stop thrills. Massive financial rewards around the globe should be in store for Sony along with a no-brainer launch for a new franchise.

In a crackerjack and very lean 100 minutes (including credits), the lithe and physically dynamic Jolie burns up the screen and shows the boys how it's done. She plays Evelyn Salt, a top level CIA officer who has unexpectedly been "outed" by a defector (Daniel Olbrychski) as a sleeper spy. According to intel, sleeper spies were planted in the U.S. by the Soviets years ago as part of an elaborate plan to be executed on "Day X," the appointed time when a cell of spies is set to wake up and begin an attack on the United States. Freaked by the accusations, Salt goes on the lamb taking actions that make her look guilty. The officials are incensed and her actions cue an elaborate cat and mouse game between Salt and her once-close CIA colleague Ted Winter (Liev Schreiber); all of this occurs just as the Russian President is due to arrive in New York for a speech.

Initially concerned for the safety of her newly missing husband, Salt has a strong emotional reason for getting to the truth of the matter and stopping unknown evil forces before meeting with tragic consequences for herself, her family and her country. But of course there are twists galore and plenty of diversions set up by director Philip Noyce (Patriot Games, The Quiet American), to keep us guessing throughout about the real identity and motives of this woman.

Although the movie doesn't slow down for even a nanosecond, there is time for character and story development to make this incredible situation credible enough to keep us engaged.

Jolie is just dynamite here, reportedly performing most of her own numerous stunts (from an elaborate freeway chase on top of semis to a freewheeling swing through the White House), and she still manages to give dimension to this intriguing character; intriguing also is the fact the character was originally written for a man and converted when Jolie became interested in the project. Schreiber is perfectly cast as her devoted colleague who's slowly convinced he's been duped, while Chiwetel Ejiofor is also a welcome presence as a straight-laced CIA officer looking to bring Salt in at all costs. Olbrychski is excellent as the defector whose initial interrogation kicks off the mayhem.

Noyce, whose varied body of work ranges from the Tom Clancy thriller Patriot Games to the searing Michael Caine drama The Quiet American, is a strong director who knows how to do it all. Here, he's crafted the perfect summer blockbuster; it's exciting and full of smarts and style. Plus it's got Jolie. This thing rocks.