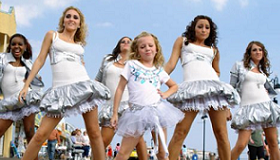 It was bound to happen sooner or later: horrible, low-budget clones of High School Musical and Glee will soon be crowding theatres and the airwaves. Yet, even by the lowest standards imaginable, little could prepare us for this Jersey Girls mess about a talent competition in which a group of 12 year old Miley Cyrus wannabes compete for a million dollar prize against a more seasoned quintet of teenage girls. Independently produced with a cast of unknowns (who surely will remain that way) this lame musical advertises itself as "the most rockin' movie of the summer." Replace "rockin'" with "rotten" and they would just about have it right. Ill-advised theatrical run on over 600 screens backed by significant TV ad buys will crash and burn within a week and you can start looking for Standing Ovation in the bargain bin at Blockbuster.

Hack writer/director Stewart Raffill has slummed with titles like Tammy And The T Rex and Sirens Of The Caribbean since his last recognizable release, 1991's Mannequin On The Move. Raffill is obviously aware he has no talent for witty dialogue so he pours on the music, which here consists of endless formulaic tunes that are indistinguishable from each other. This is the kind of movie where the audience of extras orgasmically react after every song as if they were at a Bruce Springsteen concert instead of watching a bunch of kids who wouldn't make the cut in a junior high production of Bye Bye Birdie. The tired and predictable premise revolves around a nationally televised, million dollar music video competition in which the primary contenders are a group of rag tag 12 year olds called "The Five Ovations" who must compete against the arrogant teenaged favorites, "The Wiggies" for the big cash prize and presumably eternal stardom.

Mainly shot and cast in New Jersey, the girls in this film are so cloyingly forgettable they make Miley Cyrus look like Edith Piaf by comparison. To be fair almost nothing they have been given to say or sing is worthy of anyone's talents, but out of nowhere they do get an opportunity to launch into a version of the great Ike and Tina Turner classic "River Deep Mountain High." This would have Tina turning over in her grave if she were dead. (Hopefully she'll never see this movie; it just might kill her.) Lead Kayla Jackson as Brittany isn't much in the singing department but at least she, along with the Ovation's plucky, mafia-style, kid manager, Joie Batalucci (well played by Joie DeCarlo), are sporadically amusing and competent actresses. Worst of all though is the youngest of the bunch, Alanna Palombo, who looks like she's channeling Jon Benet Ramsey and is saddled with lines like " My name is Alanna Wannabe and I'm a Gonnabe!"

The only significant name on the film's credits is Barbra Streisand's husband, actor James Brolin, whose company made the film and is listed as Executive Producer; this proves his wife's nose for musical perfection apparently doesn't run in the family.