close
The brooding, Scandinavian psyche. Soon to be bleached for American audiences.

The Girl Who Played With Fire 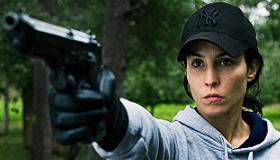 The girl with the dragon tattoo (Noomi Rapace) is accused of triple-homicide in this, the second installment of a trilogy of novel adaptations by the late Swedish author Stieg Larsson. In the first film we met the aforementioned tattooed girl, Lisbeth Salander (Rapace), who took it upon herself to clear the name of intrepid journalist Mikael Blomkvist (Michael Nyqvist) and bring down a family of serial killers. This time it's Nyqvist who will have to help Lisbeth establish her innocence while dealing with a sex trafficking ring (and these are just the sub-plots). The adaptations are said to stick close to the novels in plot (which, in the films, can be lumbering and overly dense) and tone (which is relentlessly dark, brooding and strangely sexy). English speaking audiences will be treated to "Americanized" versions of the films in around a year. These re-adaptations will likely be brighter and less sexualized, particularly if the dreaded PG-13 rating is sought. Lisbeth tends to taser people in the nether regions and have hot lesbian sex with hot lesbians, and occasionally ordinary men. Even if this business makes it into the American films we think the attitude with which they are undertaken will not. Here, attitude is everything, and the attitude is not PG-13. We suggests that American audiences catch the Swedish films but given the American propensity for avoiding subtitles, and the studio propensity for PG-13 movies, it's likely the big money will be made by the American productions, with these raw, brutal Swedish films left for expatriates and the arthouse crowd.

In any case, The Girl Who Played with Fire works well as a stand-alone feature, though it's more fun if you've seen the first film, where a few ancillary characters and events are established and thus provide those lovely "ah-ha" moments that puts one slightly deeper into the narrative. Indeed, the story here picks up not long after the first film ends. Having successfully gotten away from the sadistic pig of a man who was both the executor of her inheritance and her freedom, Lisbeth has hidden herself away in hopes of living something like a normal life, but the girl with the dragon tattoo is not that lucky. Through a combination of fairly convoluted events Lisbeth finds herself accused of murder, on the run from a Swedish motorcycle gang and a huge killer who can feel no pain. This time it is the journalist, Michael, who must piece together the trail of clues Lisbeth leaves for him, and reveal the truth. It's a trail that not only leads to a scandalous sex ring and the actual killers, but also to the truth of Lisbeth's past-a past that involves the police, the government and Lisbeth's own father.

The next and last film in the series is called The Girl Who Kicked The Hornets Nest. Since the notion here (plainly) is to ratchet up the intensity of the drama with each film by indicting some strata of what is generally believed to be very gentile Swedish society, one can only wonder what depravities the last installment of the series will unveil. We suppose we could read the books but, if it's true that a picture is worth a thousand words, it would take the entire written history of Sweden to reveal as much about the Scandinavian psyche as these two movies have managed in just under 4 hours.