close
A high energy homage to a classic 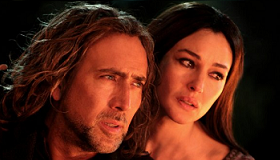 Getting its inspiration and title from the beloved 10 minute sequence in Walt Disney's 1940 animation classic, Fantasia, this CGI-filled, live-action film pays homage to its predecessor, but at its heart is still a whiz-bang action-fantasy flick that should be spellbinding summer fun for its primary family and kid target audience. With Nicolas Cage toplining as a centuries-old wizard who trains a contemporary 20 year old apprentice to help him battle his main nemesis, this Jerry Bruckheimer production is big and brash with a fantasia of battles and chases thrown in to keep the young ones enthralled for its nearly two-hour running time. The intriguing premise and frenetic pacing should guarantee a healthy box office run followed by a magical afterlife on DVD.

Producer Bruckheimer, star Cage and director Jon Turtletaub reunite here, after their work together on the successful National Treasure franchise. Sorcerer's Apprentice centers on another fantastical adventure set up in the film's opening scene. Legendary wizard, Merlin (James A. Stephens), battles with evil Morgana (Alice Krige) who, along with the rest of her ilk, is ultimately imprisoned in an odd doll that remains sealed and guarded over many hundreds of years by Merlin's devoted apprentice, Balthazar (Cage)-until we get to 2000. There, in a New York shop, 10 year old Dave (Jake Cherry) meets Balthazar who somehow sees great wizardly potential in him, that is before Dave accidentally lets evil Maxim Horvath (Alfred Molina) loose, thus setting up the first big battle (of many) between Max and Balthazar in an effort to gain control of New York and, by extension, the world. A decade passes before we meet Dave (Jay Baruchel) again, now grown up but clumsy as ever as he encounters Balthazar who decides to take the guy under his wing and make him his own apprentice in order to help save the planet. Dave, a slow learner, is seemingly more interested in saving his budding relationship with sweet Becky (Teresa Palmer) than any of the sorcery on display, and in the film's penultimate sequence, the live action version of the Fantasia animation, he boneheadedly uses magic to get ready for a date but instead finds a group of determined mops and brooms careening out of control. Eventually the forces of evil inspire this new team to great heights as together they try to accomplish the imposing task at hand.

Cage, with long hair and a cheeky attitude, dominates the proceedings with a quirky sense of fun and authority, while Baruchel plays his geeky side (recently on display in She's Out Of My League) and generally succeeds. Best of the bunch, though, are the villains, particularly Molina who seems to be having a great time on the dark side, and Krige who turns up later in the film at a crucial time.

Turtletaub is in full control of the action although he probably could have toned down a couple of the many battle sequences. A centerpiece car chase using magical elements is fun to watch and the aforementioned homage to Fantasia, with dancing brooms and Paul Dukas' original spectacular music (adapted by composer Trevor Rabin), is unquestionably the film's highlight with Baruchel channeling his inner Mickey (Mouse) with delightful results.