close
The mysterious star of a classic viral video is revealed. And boy is he angry. 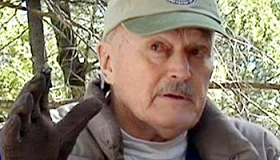 Some people crave online infamy. Others have online infamy thrust upon them. Jack Rebney neither wanted Internet stardom nor, based on what he initially tells director Ben Steinbauer in this plucky, enjoyable documentary, did he know such a thing existed. In 1988, a hilarious, humiliating, profanity-drenched clip of Rebney blowing take after take while shooting a Winnebago industrial video began finding its way into VHS machines nationwide. The consequences of Rebney's unintended fame and his surprise rebirth forms the heart of Steinbauer's doc, Winnebago Man. Steinbauer also casts a wider eye on the downside of Internet celebrity and society's love for the misery of others; it's an appreciated effort, if it's less than scholarly. The movie is really best enjoyed as a fun little addendum to a profanity-laden chapter in New Media history. A respectable number of G4 fans and net-savvy adults should be motivated to discover if Rebney appears as viciously bitter and angry here as he does in his legendary video.

In the days before YouTube, there were a number of classically bizarre clips that were passed around on VHS like rare, precious gems. You were everyone's best friend if you owned a videotaped copy of the 1986 tribute to spandex and stupidity, Heavy Metal Parking Lot or William Shatner singing Rocket Man at the 1978 Saturn Awards. The market for viral embarrassment arguably reached its pre-Reagan and Reagan-Era zenith in a clip featuring a fiftysomething bald man melting down into a pool of F-bombs and frustration as he continually blew his self-penned lines while starring in a Winnebago sales tape. As recounted by SpongeBob SquarePants writer Kent Osborne and Deuce Bigalow: Male Gigolo director Mike Mitchell, the clip slowly started seeping into the hipper fringes of youth culture. Steinbauer himself would show the video on dates and to his film students at the University of Texas. Years later, the footage found its way to YouTube, where Rebney's performance went international and phrases like "will ya do me a kindness?" wound up in major motion pictures and foreign language parodies.

Soon after the video originally emerged, Jack Rebney disappeared. Like many, Steinbauer was curious about what happened to Jack. He was also curious about why he was curious about what happened to Jack. Douglas Rushkoff, coiner of the term "viral video," says Steinbauer was suffering from collective cultural guilt. We made this poor man a laughingstock and now we feel sorry for him. Although putting a human face on such a dirty mouth could soften his love for the video, Steinbauer began the long, difficult search for Jack. After fruitless discussions with Winnebago Industries and some crew members from the shoot (who said Rebney looked "overwhelmed and over his head" during filming), a private investigator was called in. He discovered that Jack has no fixed address, no voting record, no property and no car. There are, however, a healthy amount of post office boxes in his name and only after mailing letters to every one of them does Steinbauer catch his prey.

In an era when the acquisition of fame has become so important (and so easy), Steinbauer and Rebney's first meeting is refreshing. Living a secluded life as a fishing resort caretaker, Rebney is blissfully anonymous and pleasantly flummoxed as to why his video ever caused such a gosh-darn fuss. Steinbauer can't decide if he's disappointed by the kinder, gentler Jack and in working that out, he becomes a major player in the film. The director is also the film's hero and his obstacle is trying to wrest a story from "the Angriest Man in the World." Plus, Steinbauer's there to articulate our amazement as Jack sheds the kindly uncle act and reveals himself as the same contemptuous, sewer-mouthed crank that was humiliated by the "maliciously put-together" outtake reel. Now that's the Jack Rebney we want, the one who won't contradict what we saw in the video. That, of course, says more about us than about him. Note to civilians plotting their assault on the nation's collective bandwidth: if you want viral fame, make us laugh at you, don't get us all verklempt. That's why the discovery of singer Susan Boyle was such a remarkable moment. When word spread and we clicked the link, we waited for the joke. Will she fall off the stage? Where's the punch line? When all she asked of us was to be moved by her voice, we were confused...and then enthralled. As for Jack, we laugh at the Winnebago outtakes not because the heat, humidity and swarming flies of the bygone shoot remind us that we all have bad days; that'd be giving ourselves too much credit. We laugh because he's a stranger making an idiot out of himself and ‘isn't that hilarious?' Twenty years later, in Steinbauer's hands, he's doing it again, confirming not our fears but our hopes.

Part of the film's charm is watching Steinbauer struggle with someone so obstinate and ornery. He keeps things lighthearted and transparent as he helps Jack use the Internet, the medium that has caused him so much embarrassment, to introduce his angry theories to the masses. We never get to hear any political rants, unfortunately, except for a couple of digs at former Vice President Dick Cheney. Jack mostly rails against the older generation's ultimate nemesis, namely the younger generation. The guy seems to genuinely enjoy being a miserable, hot-tempered bastard and it would have been nice had Steinbauer gotten a firmer handle on the roots of his misery. Later, the story takes a sad turn that gives the movie a second wind and when Rebney finally receives his moment in the spotlight, Winnebago Man actually hits a note of grace. His realization that he means something to people, won't go viral: uplift gets less online hits than foolishness. Still, after an often distinctive, sometimes painful, invective-filled lifetime, Jack Rebney eventually made the point he most wanted to make: he was here.