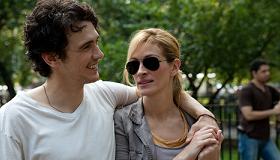 Based on Elizabeth Gilbert's best selling biography, Eat Pray Love is a merging of diary and travelogue to explore, in romantic and glowy gestures, one woman's process of rebirth. A successful writer but a less than successful wife, Liz Gilbert (Julia Roberts) decides her marriage is over and slips into a depression. A redundant relationship later she's making no progress and decides her best solution is a year of travel. Mercifully free of the bumper sticker aphorisms (or Oprah-isms) that often go along with book adaptations of this kind, Eat Pray Love amps up the atmospherics of the book to memorable (but not cheap) proportions. This is one book adaptation that should please its considerable, built-in audience. The reasonable tensions surrounding the travels of a financially comfortable westerner into the third world are gently set aside by the film's first line. Eat Pray Love is a great comeback for Julia Roberts and a journey that may feel like its own vacation given its considerable running time. Numbers should be stellar, with repeat viewings and DVD potential through the roof.

Liz is a successful, urbanite writer in Manhattan. Her husband (a memorable Billy Crudup) can't settle on a field and so has jumped from one career to another, leaving Liz to play anchor on his day-cruise through professionalism. While her editor and best friend, Delia (the ever-impressive Viola Davis), was collecting children's clothing in hopes of the day her husband would say he was ready for parenthood, Liz was collecting books and brochures for the places she'd travel. That she hasn't traveled to these locales is partly due to her husband's lack of interest and partly due to the extensive overcompensation she does to save their union: she dreams of other lands, he dreams of other lives; it's easy to see why she married him. Her decision to divorce is followed with a short but intense relationship with a younger man, but that only sends her into patterns she thought herself done with before she wed. Her journey, metaphorically, requires her to move on from the tragedy of her divorce; but her journey, physically, takes her to Italy (to eat), India (to pray) and Bali (to fall in love). Her goal is balance and once she finds it loving again challenges that balance, which is an accomplishment she doesn't feel she can afford to share. A Brazilian divorcee (Javier Bardem), heavy on the masculine energy and yet incredibly vulnerable, is the most rewarding partner for Liz. Her anxiety about re-entering a romance equates to a fear of losing herself and this peace she's worked so hard to attain. What she does is preordained by the opening scene; whether or not we like it is as well.

Eat Pray Love is a story of precious correspondences: hope chests, translations, ideas repeated by family and then strangers. These correspondences act as cosmic mile-markers that tell Liz she's on the right path and as gratifying as they can be in parts they're also examples of the way film is a tricky medium for communicating spirituality. While the film's subject is perfectly broad in appeal, using the commercial tropes it does, it can only skate over things like transcendence (its chief mystery), which means we can see how things look and that's about it. Don't get me wrong: transcendence in film is perfectly possible but we're not talking about a film that can withstand the patient rigor of Bresson (though some sweet touches are well integrated to evoke the ecstatic qualities of tiny, well chosen detail). Direction by television's Ryan Murphy (Glee, Nip/Tuck) is glossy and sitcom-tidy, with cinematography that turns every relevant seed into an ethereal moment designed for fetishistic recollection. The peeling wallpaper in Liz's Roman pied-à-terre recalls Kieslowski in form and affection but not in spirit, and this is largely the film's problem. A scene in a Roman barbershop enthusiastically addresses the matter that Americans don't know how to enjoy life: we work ourselves to the ground and spend our weekends in bed. ‘We know entertainment but not pleasure.' I'd say that, for as lovely as this film is, it's committing a sin of a comparable nature. The film knows the aesthetic of enlightenment, the filmmakers demonstrate adoration for their subject, but whether or not the film grasps the principle further is very arguable.