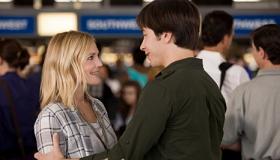 One of America's sweethearts, Drew Barrymore, curses a blue streak in Going the Distance, a comedy that melds the traditional RomCom with the cheerfully profane bromantic style pioneered by Judd Apatow. American Teen director Nanette Burstein turns to narrative features with this tale of lovers trying to maintain a relationship even though they live thousands of miles apart, a confident debut imbued with the understanding that the best date movie is one even a guy could love. Likely to resonate with a generation of young people to whom When Harry Met Sally's orgasm scene seems downright quaint, this bawdy comedy is poised to go the distance at the box office.

Erin (Drew Barrymore), an aspiring journalist, and Garrett (Justin Long), a record company junior executive, meet-cute over a game of Centipede in a New York bar. He's been dumped that very night, while she will be returning to California to finish her master's degree at Stanford in just a few weeks. So their hook up is supposed to be just that, but the one-night stand evolves into something much deeper and neither is willing to break the budding romance off despite the 3,000 miles standing in their way.

The stuff of tabloids for their on-again/off-again relationship in life, Barrymore and Long are adorable together. Even with some of the more outrageous lines that screenwriter Geoff LaTulippe has sprouting from Erin and Garret's mouths there is a sweetness there that makes them easy to root for as a couple. LaTulippe's stroke of genius was to saddle them with professions that would probably be shrinking rather than expanding even in a healthier economy. Erin is already worried that she is late in starting her career and now journalism jobs are growing ever more elusive. Garrett is just as frustrated at his boss Will's (Ron Livingston) unwillingness to sign any band that doesn't have mass commercial appeal. But he knows he's lucky to have a job in music and she knows she has to go where the jobs are, even if it's not back to New York and her beloved. The long-distance affair is frustrating, but they don't really have a choice.

Surrounding the couple are her overprotective sister, Corinne (Christina Applegate), and his best buds, Dan (Charlie Day) and Box (Jason Sudekis). Applegate is a gifted comedian, but here she is stuck in that hoary cliché of a role, the long married lady with complaints about her husband and her sex life that aren't too far removed from TV sitcom humor. Day and Sudeikis fare much better, giving even people who hate RomComs reason to see the movie. The pair is on hand to add not only a welcome sprinkling of bromance, but also the biggest laughs in the movie. Day, in particular, as Garrett's roommate who delights in disturbing the couple in the next room through their paper-thin shared wall (and who makes winning use of Garrett's apparent obsession with the movie Top Gun) is as delightful as he is demented. Both actors are hilarious, stealing every scene they're in.
Some of the movie's crude humor emphasizes the crude and forgets about the humor, and it occasionally labors under the mistaken impression that characters simply sprouting profanities is funny (does that work anywhere other than South Park anymore?). Despite those occasional missteps, Going the Distance is a winner: obscene, yes, but also as enormously appealing as the couple at its center.