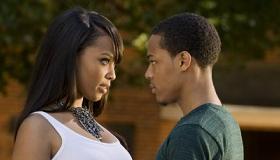 Warner Bros may have the winning ticket for big laughs and some welcome late summer fun at the movies in Lottery Ticket, an African-American cast comedy about a young guy who loses his job at a shoe store only to hit a $370 million lotto jackpot and lots of ensuing trouble as a result of "good fortune." Warners and Alcon, who hit the jackpot with The Blind Side last winter, probably won't be seeing straight 7's this time but should be pleased with the returns in urban markets and possible crossover appeal for this bright and funny entry.

Kevin Carson (Bow Wow) is not having a good day when he loses his job at Foot Locker and sees his dreams of becoming a shoe designer fly out the door with him. Fate intervenes when the single lotto ticket he reluctantly purchases becomes the sole winner; this makes Kevin potentially $370 million richer. The only hang-up is the lottery office is closed for the long Fourth of July weekend and Kevin must keep the ticket safe until it reopens on Tuesday. That becomes much easier than it sounds as he tries to keep close relatives from spilling the beans (they do), which triggers a gathering mob of "friends" who turn up looking for a handout, and golddigging women who turn up looking for...well, you know. The local loan shark and a menacing ex-con are, at the same time, trying to get their hands on the magic ticket at all costs. With only his best buddy, Benny (Brandon T. Jackson), there to lend some dubious assistance this young millionaire winds up way over his head.

In some ways the film is reminiscent of It's A Mad Mad Mad Mad World with the theme of greed and a gaggle of people all after a piece of the pot, but Lottery Ticket pays off on the laughs with a strong message about using sudden riches responsibly and the importance of giving back to the community. Before it gets around to preaching do-gooder actions there's ample opportunity for a terrific and talented African American cast to wring every bit of humor out of the simple but effective premise concocted by screenwriters Abdul Williams and Erik White (White also directs). Bow Wow (who dropped the L'il in front of his name) is a highly capable leading man and attractive presence as Kevin, fronting the all-star group that includes standouts Naturi Naughton as the girl who likes him for himself (not his luck), and Jackson as his Jughead-like friend. There's also reliable work from Keith David as smooth loan shark Sweet Tee, Terry Crews as his driver, Gbenga Akinnagbe as a vicious (and perhaps OVERLY violent) parolee out for the loot and the divine Loretta Devine as his excitable Grandma. Teairra Mari is perfect and alluring as the hot girl trying to cash in by throwing herself at Kevin. Turning in some of his best work in a supporting role this time, Ice Cube (who also executive produced) is wonderful as a local has-been boxer who offers his own brand of inimitable wisdom and then some.