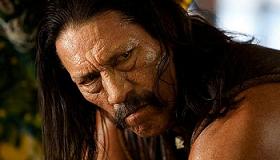 Viva Machete! Thanks to the Arizona-bred immigration brouhaha, the timing couldn't be better for Robert Rodriguez to push Latino Power. But it's jocular splatter not political satire that makes his latest exploitation flick a winner. While a blunt instrument (the lines in star Danny Trejo's face are deeper than the movie), Machete provides ample end-of-summer fun. How often can you see Cheech Marin nailed to a cross or Lindsay Lohan in a threesome with Trejo and the actress playing her mother? The real rub is whether that's enough for Machete to shatter the Grindhouse ceiling or outperform more recent duds like Jonah Hex and Piranha 3D.

Prompted by the positive response to a trailer that appeared between Quentin Tarantino's Death Proof and his own Planet Terror, Rodriguez has decided to give prolific trouper Trejo his first leading role. Actually, the director traces the idea of a knife-wielding, Hispanic vigilante back to Desperado, in which Trejo's charisma in a small role attracted the most attention from locals on the Mexican set. Were it not for his hardscrabble life experiences, including substance abuse battles and stints in jail, you might say LA native Trejo--he of the unmistakably bad-ass visage and inked torso--was born to play this honorable killer.

An ex-Federale whose wife and daughter are executed by drug lord Torrez (Steven Seagal) in the prologue, Machete gets his shot (er, slice) at revenge three years later. Lying low as a day laborer in Texas, he's hired by a shady gent (Jeff Fahey) to assassinate a virulently anti-immigration State Senator played by Robert De Niro. Naturally, he's double-crossed. What the scumbags behind the right-wing conspiracy he exposes don't realize is that Machete is virtually impossible to kill (or sideline for more than a few frames). Felling opponents with anything sharp--a corkscrew, shards of glass, gardening shears, weed whackers and, of course, machetes--Machete does right by his people and B-movie dynamics at the same time.

The action constitutes a virtual cornucopia of impalings, severed appendages and decapitations, along with the requisite spurting of blood. Yet the camera doesn't dawdle over the gore. In fact, Rodriguez could have made more of the terrifically grotesque sequence in which Machete fashions an escape rope out of a henchman's intestines. And watching Marin's gun-toting Padre crucified in his own sanctuary is wince-worthy without being graphic or disturbingly sacrilegious. The only major disappointment is Machete's showdown with a sword-wielding Torrez. This too-swift encounter happens during a climactic rumble between the Mexican dishwashers, gardeners and low-riders Machete empowers and the vicious, border-protecting rednecks led by Don Johnson's character, Von.

The emphasis is on accessible humor in the form of double entendres, sight gags, mock TV commercials and dialogue peppered with Spanish slang. It's stuff that any 18 year old guy will get, although arguably the funniest line constitutes a salvo in the intergenerational (and cross-cultural) technology wars: "Machete don't text," delivered by Trejo in menacingly hilarious deadpan. The movie's championing of illegal immigrants and America's Chicano underclass is pertinent without being substantive.

The ensemble is a huge plus. De Niro salutes his Heat co-star, Trejo, with his best-ever slumming stint and maybe his best performance of any kind in years. And, of course, lady magnet Machete gets to juggle two comely Latinas: sympathetic immigration agent Sartana, played by Jessica Alba, and revolutionary burrito-slinger Luz, embodied by Michelle Rodriguez. Finally, Lohan may have found showbiz salvation in the role of the drug-addled daughter of Fahey's gringo villain, a sullied maiden with incestuous ties to both her parents who gets to exact her own revenge while wearing a nun's habit.

Rodriguez shares directing credit with protégé Ethan Maniquis. The division of labor isn't known but, while the production has its moments, no one will point to Machete as a sterling example of retro visual aesthetics. Technical considerations, like politics, are a mere means to the end called "entertainment." The picture concludes by briefly touting two sequels, Machete Kills and Machete Kills Again. As good a time as Machete offers, it's not likely to spawn a sequel starring Trejo. Given the target demographic's desire to watch Michelle Rodriguez's washboard abs and Alba's willingness to be photographed naked in the shower, there's a better chance Luz or Sartana will get a spinoff.