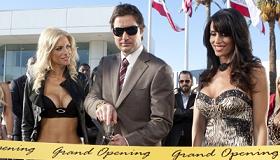 The ads for Middle Men stress pornography. In truth, it is a movie about credit card transactions and how much money can be made processing them. The porn, the cokeheads and the Russian mobsters are the elements that are supposed to make this Boogie Nights wannabe sexy. It never quite achieves that, but Luke Wilson's terrific performance renders an uneasy hybrid of crime drama, comedy and ecommerce far more compelling than it otherwise would be. It's also schizophrenic, as it tries to simultaneously celebrate family values and sleaze. Too scattershot to completely satisfy fans of any of the genres it touches, box office returns look to be modest at best.

Wilson is Jack Harris, a middle-class family man and a businessman who specializes in solving problems. It is that capacity during the go-do years of the 1990s, just as the Internet is beginning to explode, that he meets Wayne Beering (Giovanni Ribisi) and Buck Dolby (Gabriel Macht), drug-addled online pornographers who owe money to Russian mob boss Nikita Sokoloff (Rade Serbedzija). Realizing that the pair has stumbled onto a goldmine, not in smut but in the way they collect payments (a process that could apply to other companies), Jack throws in his lot with them and retools their business.

Jack is the narrator and so certain questions are never answered. In the time-shifting opening sequence, he handles a situation for gangster Joey Lala (Robert Forster) and demonstrates his talents as a fixer, but how it is that an apparently stand-up guy like Jack should count so many hardcore criminals among his associates is not totally clear. And while he may have good reason to stay in business with his partners, he knows how stupid and unreliable they are and how dangerous they can be, especially the volatile Wayne. So why doesn't he keep a closer eye on what they're up to? And Jack's a smart man, so why doesn't it occur to him that no business deal with a sleazy lawyer like Jerry Haggerty (James Caan) is ever clear cut (Haggerty is always working some kind of angle). The biggest question of all is, knowing that his wife (Jacinda Barrett) disapproves of his involvement in the porn world and that he's risking his marriage by participating, why not transition to work with more wholesome companies? After all, it is Jack who makes the point early on that Wayne and Buck developed their ecommerce and beat companies like Amazon to the punch.

Of course, books aren't sexy and silicone-enhanced breasts are. Despite the pornography trappings, Middle Men is a kind of morality tale. Though supposedly a fictionalized version of producer Christopher Mallick's real-life adventures in the nascent wild days of the World Wide Web, it also echoes in certain ways director/co-writer George Gallo's 1991 dramedy 29th Street. Also rooted in actual events, that 1991 Anthony LaPaglia vehicle told the story of the first New York state lottery winner, a man who lost perspective and let big money create more problems than it could solve. Ultimately, between these films, riches threaten the very foundation of the family.

Middle Men would be a far stronger movie, despite its inconsistencies, with stronger supporting characters. Jack emerges as such a singular presence, but not just because of his constant voiceover narration; he's the only character that comes across as a fully fleshed-out human being. The others range from thin to outright caricature, with Ribisi especially wasted. Wayne is so broadly drawn that he is a cartoon, so over the top that he could be a live-action, coked-up Pepe Le Pew (without the charming accent).

For Wilson, Middle Men offers a showcase for the talents of an actor whose most recent high-profile gig has been in the ignominious role of AT&T pitchman. He runs with the opportunity, his robust star turn providing the single best reason to see the film. In a way, like the character he plays, Wilson is a fixer here too; Middle Men is made better by the strength of his performance.