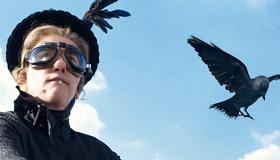 The sinister governess with the hairy moles, the unibrow, the snaggletooth and the mysterious way of bringing positive change to distressed families is back in Nanny McPhee Returns. This time out, the world and children are at war, and a mother, harried at work and home, has barely the time to miss her husband at the front, or to suspect what no-good her ne'er-do-well brother-in-law might be up to. With Maggie Gyllenhaal, Rhys Ifans and a quintet of talented children joining screenwriter/star Emma Thompson in her return to the Nanny McPhee universe, this comic fantasy will delight kids and parents alike. With the family audience turning out, ticket sales should be brisk.

Not strictly a sequel to 2005's Nanny McPhee, the latest installment takes place during an entirely different time period. Though it is never named, World War II is apparently raging. Isabel Green's (Gyllenhaal) husband is away at the front, leaving her to parent their three young children and hang onto the family farm as best she can. She also works at the village grocer with Mrs. Docherty (Maggie Smith), a sweet but dotty old lady whose help only makes Isabel's job that much more difficult. Two things conspire to bring the Green family's situation to a perilous point and to bring Nanny McPhee to their door: Isabel's brother-in-law, Phil (Ifans), wants to sell the farm and the family grows by two when her nephew Cyril (Eros Vlahos) and niece Celia (Rosie Taylor-Ritson) come from London to stay with her and her brood, Norman (Asa Butterfield), Megsie (Lil Woods) and Vincent (Oscar Steer). The city mice and the country cousins hate each other on sight, their fights overwhelming Isabel but providing a perfect teaching moment for Nanny McPhee and her magic walking stick.

The movie is exceptionally well cast, particularly the children, who are delightful even when their behavior is beyond bratty. This time out, Nanny McPhee has a familiar in the form of a gas-prone jackdaw that's fond of eating window putty and knows his way around a barley field. When writing bits for animals, Thompson is at her wittiest and she is downright inspired in one CGI-abetted scene that pays improbable homage to musical swim star Esther Williams. Other funny moments include Phil's misadventures with a pair of deadpan hit women, Miss Topsey (Sinead Matthews) and Miss Turvey (Katy Brand), the sole scenes in the movie seemingly aimed directly at the adults in the audience.

Not amusing at all is the way Mrs. Docherty's apparent senile dementia is played for laughs, particularly in one scene when she mistakes a pile of cow manure for a cushion. But that is one of the few minor missteps in one of those rare kids' movies that entertains both little ones and grownups. There must really be something enchanting about this McPhee woman if she can accomplish that.