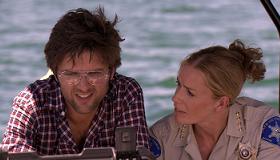 Are you a breast man? An ass man? Or a fish man? Either way, there's plenty of all three in this bloody spree by French director Alexandre Aja. The script is ridiculous, the bodies are great and the film skates so long on the line between knowingly bad and bad that by the time the body count hits 100 and the booby count hits 1000, we've lost track of the difference. The post-production 3D lacks depth, but at least unlike Clash of the Titans, the shots were always meant to be a converted; it's a cheap way out, sure, but fan boys blown away by a shot of 3D DD jiggling underwater have other priorities. Piranha will take a bite out of the next two weekends' box office and quickly go extinct, but will linger on in its target audience's fantasies.

Sunny, scenic Lake Victoria is under attack from invaders. Not man-eating fish (yet), but 20,000 spandexed Spring Breakers, all in various degrees of intoxication and undress. Deputies Ving Rhames and Elisabeth Shue (playing a mom of three) are entrusted to keep order when into their harbor swims an oily predator: Jerry O'Connell, the producer of Wild Wild Girls trolling for fresh flesh. Model Kelly Brook lures Shue's 17 year old son, Steven R. McQueen, and his crush, Jessica Szohr, into O'Connell's net--or really, his luxury yacht--and they set sail for a day of soft core porn shoots just as scientist Adam Scott realizes a fissure underneath the lake has unleashed prehistoric piranhas. "There's thousands of them--and they're pissed!" he yelps.

Piranha 3D isn't Jaws. Steven Spielberg himself couldn't get this script an Oscar. But even a mocking comparison is good enough for Aja, who swipes the line, "Do you think a propeller could have done this," and enlists Richard Dreyfuss to play the opening scene chum. (With 3D, we go inside Dreyfuss' mauled spleen.) And for good measure, Aja's also enlisted Christopher Lloyd to resurrect Doc Brown in his hilarious, over-excited cameo as a local ichthyologist. ("These fish have been dead for 200 million years!," he warbles in Doc's sing-song science.)

What's terrible about a piranha kill is that they don't have a Great White's tell-tale fin. And worse, their victims are nibbled to death. When pulled out of the water, the flesh hangs off their bones like red, ropey algae. The piranhas themselves look like bullets with beer bellies and teeth. They're as ugly on the outside as their prey is on the inside. The bros and bimbos served up as jerk tartare are so repellent we're almost on the side of the fish. On Lake Victoria, wearing a Pixies shirt will get you called an "asswipe," and there's an ever-expanding lexicon for "boobs." My faves were "coconuts," "weapons of mass-turbation" and Eli Roth's gift for drawling "titties" across eight syllables. Even Shue's two young kids are sexist, the daughter asking grownups about their cup size and the youngest son telling her to "be a girl and just sunbathe or something."

Ruthless and ridiculous, Aja's horror comedy has a purity of vision. Even when a babe is sliced in half, first her bikini top falls off for a booby shot. And why not? It's August, vacation time is almost over, and if you haven't yet hit your bikini quota, buy a ticket and get a summer's worth in 90 minutes. When the blood starts gushing, wet t-shirt contests get a whole new meaning. Go, fish, go!