close
Not new but still spectacular 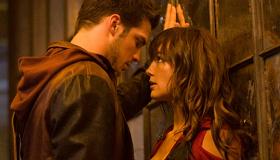 Back for a third go-around, the Step Up franchise is still as light on story as it is on its feet, but audiences looking to get a cinematic workout from the high-stepping action served up here could do a lot worse. Pitting a ragtag group of street-wise dancers against a slick, soulless bunch in the ultimate dance battle, Disney and Summit Entertainment should find plenty of box office action, particularly from young females who made hits out of the first two installments. The real story though is the exceptional and inventive use of 3D technology to make these routines come vibrantly alive. Whether general audiences will want to pay the premium for an upgrade from 2D to watch a lot of talented young hoofers do their thing is another question.

Director John Chu says he was "inspired" by the slick choreography of such greats as Gene Kelly, Fred Astaire and, more recently, Michael Jackson. Even though Step Up 3D consists mostly of one flashy, hip-hop dance-off after another, the influences are clearly visible and if nothing else Chu has cleverly incorporated sweet homages to the greats he grew up admiring. Particularly of note is a salute to Kelly's signature Singin' In The Rain, when, after ending Step Up 2 The Streets with a rain-soaked ditty, he has his dancers splashing around, this time on a wet dance floor ala Kelly in his famous umbrella number from the 1952 classic. Then there is a sweetly rendered tip-of-the-top Hat to Astaire with "I Won't Dance," first heard on screen in 1935's Roberta. For that scene, co-stars Adam G. Sevani (veteran of Step Up 2) and Alyson Stoner (seen in the first Step Up) are united as Moose and Camille, on what looks like an old Hollywood backlot, to summon their best Fred and Ginger.

Fledgling filmmaker Luke (Rick Malambri) encourages outcasts (who can dance of course) and assembles them to form The Pirates, dancers who all hang together in a vast warehouse until money woes force them to enter a dance contest. The cash haul promised to the contest winner is $100,000, but to get it they have to beat arch rivals, The Samurai. Julian (Joe Slaughter) leads The Samurai; he's the not-so-friendly brother of Luke's newest recruit and potential squeeze, Natalie (Sharni Vinson). In true Sharks vs. Jets fashion, the rivalry escalates with Natalie caught in the middle of big bro and new BF. A subplot involving nerdy but talented Sevani and his bungled romance with Stoner is also mixed into the screenplay, which basically tries to wrap a thin plot and some rather pedestrian dialogue around the dancing. So what else is new for this genre? It's still a bunch of kids putting on a show in the barn.

The only reason to see this incarnation of the series is for the dancing and as it was shot in true 3D it is often spectacular to behold as this enormously talented young group of performers lets loose and comes right at us, busting move after move. It truly is dancing like we've never before seen onscreen, and Chu shoots just the way his idol Gene Kelly did, mostly full frame without a lot of editing tricks. Bravo for that.