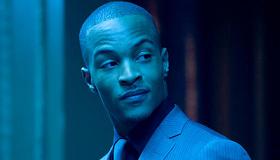 Watching a team of hot, young actors move through a slick Los Angeles cityscape dressed in stylish clothes and set to a thumping soundtrack may provide audiences enough distraction to momentarily forgive Takers for its vacant plot, indulgent slow-motion photography, cliché dialogue and outlandish gun battles. Then again, it's easy to imagine New York audiences at a 42nd Street multiplex laughing along at all the wrong places and simply enjoying director John Luessenhop's armored car heist drama for the unintentional trash classic that it is.

Serious crime drama buffs understand that Takers may share the same Los Angeles backdrops as Michael Mann's classic crime drama Heat but little else. The lack of a marquee star, poor reviews and laughable word of mouth will dampen any chance for crossover biz and limit Takers to a modest box office tally similar to recent urban dramas A.T.L. and Armored.

A top-notch team of bank robbers (Chris Brown, Michael Ealy, Hayden Christensen and Paul Walker), led by the suave and mysterious Gordon (Idris Elba), agree to partner with a former colleague just out of prison (Steve Harris) for one last job before breaking apart and going their separate ways. Of course the lure is the biggest haul of their young, criminal careers: $30 million from an armored car. An obsessed detective (Matt Dillon) and his partner (Jay Hernandez) stand in their way.

Takers has more than its share of attractive, young faces and the ensemble led by Elba, Harris and Ealy display believable camaraderie with each other. Urban crime films have become a successful fixture for the Screen Gems division at Sony Pictures but this co-production from Rainforest Films and Grand Hustle Films fails to deliver an exciting action climax or a worthy showdown between the criminal anti-hero of the film, Gordon, and his double-crossing nemesis.

Elba, soon to take over for Morgan Freeman as detective and psychologist Dr. Alex Cross in the upcoming Cross, manages to get through the film with much of his integrity and charisma intact. Harris displays ample charm as the former thief who may or may not be conning his former partners. Zoe Saldana sits on the sidelines as the film's main female character, the cliché, suffering girlfriend. Still, there's only so much they can do with a story shot full of bullet holes and implausible scenes.

For Luessenhop, whose previous film was the 2003 indie drama Lockdown, he can take pride in the film's technical polish. Working with cameraman Michael Barrett (The Mysteries of Pittsburgh), there are scenes of L.A. sunsets that positively glow. However, Luessenhop's frequent storytelling missteps on Takers prove that he has much work to do when it comes to quality storytelling.

What helps salvage the film (much to the surprise of director and co-writer Lussenhop and his fellow writers Peter Allen, Gabriel Casseus and Avery Duff) are the unintentional laughs generated by the film's outrageous gun battles, childish dialogue and an action chase featuring Brown that seems to go on forever. Takers will likely fade quickly as one of many B-action movies that fails to catch with wide audiences once the tent-pole blockbusters end and summer draws to a close. In terms of its place in film history, Takers may rise alongside Jim Brown's slaughter movies and long-ago actioners like Killer Force and Sweet Revenge as a camp classic perfect for a midnight series at New York's IFC Center or The Aero in Los Angeles. Not sure if that's what Luessenhop had in mind when he started work on the film.