close
Too predictable to be saved by Clooney’s abs 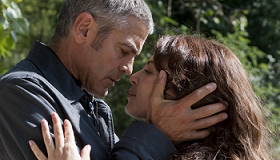 At 49, George Clooney has a body most 25 year olds would envy. The American underlines that with scenes of him shirtless, toning those fab abs and tight biceps. That scenery, as well as the beauty of Castel del Monte in the Abruzzo region of Italy (where much of the film was shot) are the chief reasons to see this limp thriller. This story of a hit man who wants out after performing this one last job is so threadbare, trite and predictable that not the star's formidable charisma nor the considerable talent of director Anton Corbijn can come close to erasing its deficiencies. A half-naked Clooney will generate some heat at the box office, but that is a flame that will quickly die out.

The medieval Italian hamlet becomes a hideout for Jack (Clooney) while Pavel (Johan Leysen), his handler in Rome, sorts out who has apparently put a hit out on the American hit man. To occupy his time while he's lying low, Pavel puts him in touch with Mathilde (Thekla Reuten) who wants him to build her a gun. Jack agrees, but he tells Pavel, after this, he's done. Mostly, he spends his time by himself, befriending only Father Benedetto (Paolo Bonacelli), the hamlet's priest, and Clara (Violante Placido), a prostitute. Even in this sleepy setting, he can't relax. People are coming for him and he can't trust anyone.

There is not a single surprising moment in the film. A 5 year old could work out how it will all end within the tale's first minutes. That might be a minor deficiency if there was more to Jack, but the character is barely a sketch. He reads up on butterflies, has a butterfly tattoo between his shoulder blades and recognizes rare and endangered butterflies when he sees them; Mathilde and Clara both call him "Mr. Butterfly," and that is about the extent of his character development. That, and his insistence the he's not good with machines, even as he repairs a truck and handcrafts an assassin's rife.

Clara also says Jack is "a good man," a preposterous statement, but one meant to be taken at face value. Acknowledging that the guy is a vicious killer facing the same kind of miscarriage of justice that he has spent his professional life meting out is to remove any rooting interest in Jack or what happens to him, and there is precious little of that from the start. So, we are to believe Clara just as we are to believe that she is a hooker with a heart of gold and that she would naturally fall head over heels for her john, because he is that good. (Well, he is George Clooney.)

Clooney's built a movie career making far better choices than this, but apparently the lure of Abruzzo was too much for him. For him, this is but a blip in a long career. The real pity here is for director Corbijn; this is only his second feature after the Ian Curtis biopic Control. Aided by Herbert Grönemeyer's evocative score and Martin Ruhe's exquisite cinematography, the filmmaker has constructed an elegant film that might have been an Oscar contender had Rowan Joffe's screenplay (and A Very Private Gentleman, the Martin Booth novel he adapted) been something stronger. Instead, Focus Features is sneaking the film into theaters in the traditionally weak month of September. There is a reason they call these the dog days.