close
Action of (and with) the “Old Guard” 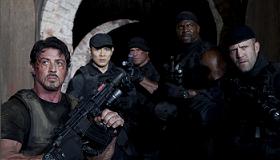 A who's who of classic action stars light up the screen for pure combustible entertainment in Sly Stallone's The Expendables, a sort of Dirty Dozen meets Inglourious Basterds--and then some. Though this film has a less-than-plausible storyline that's already been trotted out in various forms earlier this year (The A Team, The Losers), it's filled with literally explosive excitement. This summer flick finds a group of seasoned mercenaries on an unexpected suicide mission to overthrow a corrupt South American dictator. Released nearly a year after Quentin Tarantino's Basterds, Expendables hopes to make lightning strike twice in an end-of-season mission to storm the box office and makes off with a lot of loot. All signs point to success with male audiences turning out in droves to see a group of stars who, individually, are behind their prime, but together create a dynamite time at the multiplex and a wee bit of nostalgia for guys longing for action's golden days of the '80s and '90s.

The basic plot of this Lionsgate release follows the formula honed by tons of testosterone-laded movies in which a ringmaster gathers his group of skilled buddies and sets out to do the dirtiest job imaginable. The basics are no different this time as leader Barney Ross (Sylvester Stallone) brings right hand man and former SAS blade expert Lee Christmas (Jason Statham) along with hand-to-hand combat specialist Yin Yang (Jet Li), long barrel weapons specialist Hale Caesar (Terry Crews), bomb wizard Toll Road (Randy Couture) and burned out sniper Gunner Jensen (Dolph Lundgren) together to partake in a CIA-backed operation to overthrow evil dictator, General Garza (David Zayas). What seemed like a routine slam-dunk job turns dangerous when they learn they have been thrown to the wolves and are facing a far tougher assignment than they ever dreamed. Handed this thankless gig by mystery man Mr. Church (Bruce Willis), Ross's mission is further complicated by his emotional involvement with his contact, the local freedom fighter Sandra (Giselle Itie), who turns out to be the dictator's daughter and is accused of double crossing dad. After a run in with the really bad guys, a rogue ex-CIA guy named James Monroe (Eric Roberts) and his number two, the appropriately named Paine (Steve Austin), are forced to leave Sandra behind for a certain death sentence. Her exile turns out to be brief because a suddenly guilt-ridden Barney commandeers his team so that he can return to right wrongs and save the girl.

Employing every variation of gun (big and small) and explosions (big and bigger) The Expendables might qualify as the loudest movie of 2010, particularly when Crews goes to town with a giant Uzi; its rumble could shake the theater from its foundation. Although the action scenes aren't always directed coherently and the dialogue (from a script by Stallone and David Callaham) is often pedestrian, you cannot fault the casting, which unites this team of genre names and lets them shine. Lundgren is quite engaging as the confused Gunner and Li is amusing and in control as Yin Yang. Statham provides solid, much needed support throughout and though he often steals the film from Stallone, 64 year old Sly proves he still got "it." One scene, sure to be the film's most talked about, unites Sly with his two other one-time superstar rivals, Bruce Willis and an unbilled Arnold Schwarzenegger, in amusing cameos in which they try to out-insult each other. Mickey Rourke also turns up in a handful of scenes as the gadget guy, Tool. Why not?

With this all-tough guy cast we have to ask the question about one missing part of the puzzle: was Steven Seagal just too busy or something?