close
The demons are the least frightening part 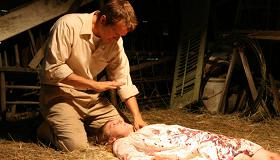 Part Cannibal Holocaust, part The Apostle, Daniel Stamm's The Last Exorcism is interested in poking holes in false prophets, and the first faker in line for exorcism is fake documentary. This found-footage mock-doc is a perfect late summer horror and will hopefully provide for Lionsgate a bit of the Blair Witch black magic Artisan scored in 1999, if to a smaller degree. It's scary fun and packed with comic bits that skate between sad and absurd like the best of reality TV. At my tent revival, I'll pray The Last Exorcism goes platinum.

Reverend Cotton Marcus (Patrick Fabian) was ushered into testament and evangelism very young. A performer at heart, Cotton grasps the show more immediately than he grasps the purpose, which is perhaps why he gels so quickly with his camera crew. "I could preach to them my grandmother's banana bread recipe," he boasts, and when he goes inside and the camera shows churchgoers entering rapture on his bum testament, we know who the villain is. But Cotton aims to reform...somewhat. Cotton's son was born premature and when he realized the threat of losing a child and saw that a boy in a neighboring state had been suffocated during an exorcism, he decided the process needed debunking en masse; hence the presence of the camera. The family he chooses for his "final exorcism" resides in a part of Louisiana that feels like legit Americana, but it's precisely the part of the country in which we expect to see tent revivals and snake oil salesman. Ironically the closest we get to shaman or charlatan is our protagonist, who swiftly becomes our voice of reason when faced with local superstition. Driving in he tells the crew this territory has existed under six different flags, contains many languages and just as much illiteracy, so lore and demons are par for the course. Cotton isn't just disingenuous, he simply doesn't believe in spirits and when he meets this sweet girl named Nell (Ashley Bell), whose fundamentalist father decided to homeschool her after he found their local Pastor teaching "more than just church songs," everyone takes an immediate liking to her and decides the father is the real demon in the house. Regardless if the cause of the "disturbance" is spiritual, psychological or plain psychotic, the trouble is real and Cotton learns quickly that years of knowingly laughing at the confusedly possessed has left him with an inability to do The Lord's Work in the face of genuine need. It's stunning to see what this life of disingenuousness and cynicism reaps for Cotton, and the climax and comeuppance of the characters on either side of the line of good and evil are epic, which is only right, we're talking about the war between honesty and deceit, sincerity and cynicism: battle lines should be drawn dark. What we aren't precisely talking about is the war between God and Satan, but that's okay because in this movie God's messenger preaches banana bread.

The first act of The Last Exoricism establishes context like the best ethnographic films, which means we're learning about a reality that can't be judged on face value by way of an educational model that we've vested with authority to reveal truth. The casualness of the camerawork also underlies the "foundness" of the footage we're watching, as if the image is somehow allowed to be less pliable if the information in it is stumbled-upon and not delivered. How the footage comes to be available to us now, after the tragedies implied by the film, is unclear; this is a useful bit of logic because it keeps us guessing but it also reminds us that the entire edifice is false. The film, in a hundred ways, plays upon falsehood, in fact the only seemingly authentic thing in it is a ritual that happens half a football field away from us and we lack any real access to even that. (Lest I mention here that rituals, by nature, revolve around actions performed. It's another conundrum.) Everyone and everything else in the film is just reaching towards a reliable reality and only stabbing at it (pun intended) in oblique ways. On the level of thriller, The Last Exorcism does more than its job with scares and creeping tension and knock-knock-boos, but the deeper scare it leaves you with is the sinking distrust you can't believe even the travesty before you. There aren't demons that can get under your skin deeper than that.