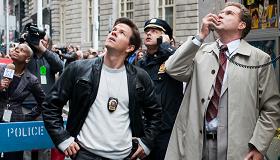 When a bomb explodes before Bruce Willis, his cheekbones are highlighted with ash. When one explodes before Will Ferrell, he collapses in a puddle sobbing, "I've got blood blisters on my hands! I call bullshit on that!" The joke isn't just that he's a wuss (he is), it's that movie violence never measures up to the human pain of the real thing. Does The Other Guys measure up to a dumb summer comedy? Sure: it's dumb and consistently funny, and the weekend high in Manhattan is 88° which means the sizable audiences who'll escape to the movie theater for some air conditioning will find The Other Guys as good and fleeting as a street corner popsicle.

In dog years (or dog days of summer years), it's been eons since big-ticket action films were pure, raw action. (Though Sylvester Stallone is out to change that with The Expendables.) Instead, in a nod to audiences who fake-gripe that, "There's, like, no way he could have survived all those bullets, man!" Hollywood's made action flicks where comedians joke through hailstorms of lead, where there's no risk that Seth Rogen might actually die and, therefore, no real thrill or flutter of tension.

Into this mock-machismo climate struts--or really, tiptoes--Will Ferrell, who's spent his career lampooning masculinity. He's either under the bar (Step Brothers, Elf) or far, far over it (Anchorman, Talladega Nights). Here, he's femme. According to sour new partner Mark Wahlberg, demoted to a desk job after accidentally capping Derek Jeter in the knee during Game 7, even the sound of Ferrell's pee is feminine. Wahlberg is half a foot shorter than Ferrell, but he makes up for the height with a glower that could kill pigeons. His career's being kneecapped by this namby pamby transfer from Forensic Accounting who drives (gasp!) a Prius, which in this world is like cruising in a Barbie bike. (Quick! Somebody warn Leonardo DiCaprio!) And now while real cops Damon Wayans Jr. and Rob Riggle, and superstar cops Samuel L. Jackson and Dwayne "The Rock" Johnson are out cracking skulls, these two are stuck at NYPD headquarters where Ferrell whistles the theme to I Dream of Jeannie while Wahlberg plays solitaire and grumbles.

With the entrance of shyster stockbroker Steve Coogan (whose motto is "Live for Excess!") and the $32 billion lost investment he's scheming to recoup, director Adam McKay gives this undynamic duo a chance to prove their mettle. Problem is, no one else cares, not Captain Michael Keaton (having a lark) and definitely not the audience. How can we when even McKay and co-writer Chris Henchy's script would rather squander time on Ferrell's sonorous Irish singing and supremely hot wife, Eva Mendes? (It's meant to be funny that the goon treats her like garbage despite having a doctorate and a killer push up bra, but that joke wears thin fast.)

At least unlike those uppity, over-achieving women, the movie knows its place as multiplex fast food. Or does it? At the credits, McKay runs infographics on real life Ponzi schemes, as if to suggest all the earlier shenanigans were just a warm-up for some learning. And it turns out that fact still beats fiction. While Coogan's scrambling for $32 billion, McKay reminds us that Bernie Madoff swiped double that ($64.9 billion). Of course, by this moment in the running time, choppers have now exploded next to Ferrell and left him without a scratch; they're fittingly harmless in a movie that will sell you anything for a laugh.