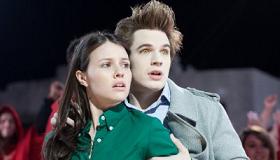 The Twilight Saga is ripe for parody. Its reliance on sweeping mountain vistas, shirtless Jacob, brooding Edward and reverse shots of Bella constantly biting her lip, furrowing her brow and running her hand through her hair, are calling cards that won't leave a lasting cinematic impact. The series simply will not age well. Unfortunately, Vampires Suck doesn't deliver the kind of lampooning that its target has set itself up for. Instead, we're subjected to a painfully unfunny entry into the already beleaguered spoof genre. Online activity, particularly on Facebook and Twitter, indicates that opening weekend receipts will be healthy. It's off the cliff after that.

In their prime, The Zucker Brothers would have had a field day with the Twilight films. It's too bad that the writing/directing duo of Jason Friedberg and Aaron Seltzer (Epic Movie, Meet the Spartans) can't deliver anything that would stand up to even a deleted scene from Airplane! or The Naked Gun. Vampires Suck is nothing more than a string of recreated scenes leading to punch lines that almost always miss. Friedberg and Seltzer fail to find humor in such easy targets as the saga's blatant abstinence agenda or its thinly-veiled sexual innuendos. Some gags miss because Eclipse already displayed an awareness of its inherent cheesiness. A joke about Jacob being contractually obligated to take off his shirt would have been funny if Eclipse hadn't already addressed that in a somewhat clever manner.

As if a string of bad jokes wasn't enough, Vampires Suck is full of distractingly forced pop culture references and shameless product placements (the actors practically mug for the camera while holding various products). As a result, the film feels choppy and it lacks anything remotely close to a flow.

The young cast is not given much to work with. Jenn Proske does a respectable Kristen Stewart impression as Becca, but making fun of Stewart's mannerisms grows old fast. Matt Lanter (playing Edward) and Chris Riggi (Jacob) fail to find any comedic footing. Only Diedrich Bader wins genuine laughs as Becca's father. Ken Jeong shows up in a thankless role that mirrors the one that Michael Sheen seemed to have much more fun with in New Moon.

Twihards may laugh quite a bit with the surface familiarity and all the bitter boyfriends who were dragged to see the Twilight films may take pleasure in watching something they loath be torn apart, but ultimately Vampires Suck has too much in common with its target. It is a forgettable ploy designed to shamelessly rip money out of teenage wallets before its audience matures and develops a real taste for quality films in the same genre.