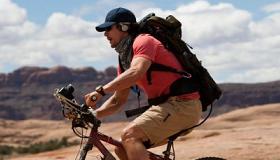 Just two years after his surprise box office smash, the Oscar-winning Slumdog Millionaire, director Danny Boyle takes a different tack and adapts canyoneer Aron Ralston's harrowing account of the 127 hours he spent trapped in a narrow cave in 2003. With a tour-de-force performance from James Franco and an imaginative shooting style that relies on two cameras and inventive angles, what could have been static and deadly dull comes blazingly to life in this powerful and compelling story of one man's will to survive. Although the story is one that can appeal to most audiences, a youthful, adventurous audience is most likely to turn this into a sizable hit. Though it's doubtful it will reach Slumdog heights, Fox Searchlight won't be complaining. Boyle's on to something fresh here.

Boyle and his Slumdog screenwriter Simon Beaufoy have cleverly adapted Ralston's memoir, Between A Rock And A Hard Place, by taking what was very much an interior dialogue and opening it up with flashbacks; Boyle's direction packs a sense of urgency into every frame and fast-paced editing by Jon Harris is strong. Ralston (Franco) was climbing in a mountainous area alone one day when a large boulder rolled loose and trapped him in a deep but very narrow cave; his arm was virtually nailed to the wall by the big rock. Trying everything imaginable to extract his right arm from this predicament he becomes delirious, drinks his own urine and records his very deterioration with his strategically placed video camera. The careless, self-centered attitude that landed the daredevil in this situation slowly earns our empathy as this fearless young guy displays a will to live at any price, and in this case that "price" could well be the loss of his arm. Boyle employed two cinematographers, Anthony Dod Mantle and Enrique Chediak, to capture this action and keep it from becoming monotonous or too claustrophobic, even if much of the movie was shot in the same severely confined crevice in which the real event actually took place. Starting out the picture with some lively mountain bike footage, featuring split screens and a cool soundtrack, the film wastes little time after hooking Aron up with a couple of girl hikers (Kate Mara and Amber Tamblyn) for a brief interlude before they become separated and he begins his ordeal. Other than brief appearances in his dream-like state, most of the other players are just wallpaper compared to Franco's constant screen presence and commanding grip on the human toll this misadventure takes on Ralston. Like Tom Hanks in Cast Away or Spencer Tracy in The Old Man And The Sea (1958), this is a story of one man against the elements and Franco delivers on all counts. Boyle and Harris' jazzy efforts notwithstanding, this is a one-man show and Franco brings in an Oscar worthy turn taking his own impressive young career on a new acting challenge and succeeding brilliantly.

The key sequence where he takes matters into his own hands is bloody and not for the squeamish but at just 95 minutes 127 Hours flies by and has pertinent things to say about human endurance and the triumph of the spirit.