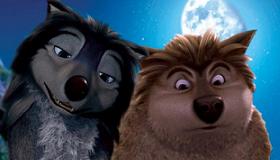 The caste system thrives in our national parks, where Alpha (or leader) wolves simply can't slum it by hooking up with their lame Omega kinfolk. For wild animals, they're bound by an awful lot of rules. This 3D cartoon tracks the furtive romance between Alpha Kate (Hayden Panettiere) and Omega Humphrey (Justin Long) after match-maker scientists capture the couple in Canada and relocate them to Idaho to "repopulate." With the sharp fangs of its stars tearing chunks out of the dreamy Barry White score, it's a precisely adequate film best for young girls who will respond to Kate's strong female huntress who naturally takes on being the breadwinner--or, really, beast-winner--of her pack.

Most animal cartoon romances stop at kissing. Alpha and Omega has the distinction of covertly being about full-on mating, here coded as "howling," as in, "You know, they can't howl together." Howling is the goal for the leaders of the Western Pack (Danny Glover) and Eastern Pack (Dennis Hopper, in his last role), who want their Alpha children, Kate and Garth, to marry and unite the packs, thus ending the bitter Caribou War.

Trouble is, Kate doesn't like the way Garth howls. (When done right, howling sounds like a duet between Luther Vandross and Celine Dion.) And Kate's fierce mother--a wolf who somehow manages to have a soccer mom bob--has only advised her on what to do if Garth gets too fresh: "Go for the throat and don't let go until the body stops shaking."

Like that line, the best parts of Anthony Bell and Ben Gluck's movie take advantage of their leads' Tao of Wolfness. While you can't call a movie with lupine log-sledding biologically accurate, it's a wickedly funny touch when Kate and Humphrey shrug at a French Canadian goose that can't give them good directions (because, at least they can eat him). Even if their boppy hunting style looks like Sonic the Hedgehog, their ethics are authentically carnivore.

The romance that builds between Kate and Humphrey as they trek back to Canada is also more natural than the typical, "I hate you! I hate you! I love you!" schlock; these are two well-meaning, bright teen wolves with mutual respect. Making them both likable is a low-bar achievement, but it's rare enough in this breed where smart girls are shrews and low status guys are goons. And as Humphrey is the Omega leader among his posse of Omegas, there's an argument that he should at least get promoted to Delta or Gamma status.

Alas, like Humphrey's half-baked jokes (sample: "Two bears are eating a clown when one of the bears says, ‘Does this taste funny to you?'"), the animation is sub-par. The 3D allows for bold, deep shots that swoop over cliffs and waterfalls, but can't distract from the wolves' clotted fur, which looks a decade behind the textures Pixar created for Toy Story 3. However, this isn't a film howling to be placed in the canon--it's content to be seen at all, and parents with restless, animal-loving children may as well throw it a bone.