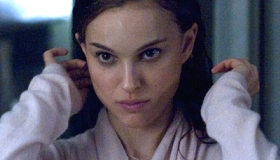 Bringing psychological horror to the twisted world of an artistically obsessed prima ballerina, director Darren Aronofsky has followed up his remarkable The Wrestler (2008) with another bruising study of physical pain and endurance in the pursuit of a dream. With Natalie Portman dominating the action and exhibiting a new screen maturity, this Grand Guignol melodrama boasts enough blood, sweat and tears (emphasis on the blood) to score beyond the ballet crowd. With its not-so-subtle sexual undercurrents and a hot "fantasy" lesbian love scene between Portman and co-star Mila Kunis, Black Swan is a handsome and frightening bravura piece of filmmaking and should do some nice business initially among the curiosity-seekers, and with any luck at all see an bump come awards time where Portman is sure to be a strong contender.

Nina (Natalie Portman) is a one-note wonder, a sexually innocent, completely devoted ballerina bent on taking it to the next level by landing the lead role in a Lincoln Center re-imagining of Swan Lake. While the character of the White Swan suits her, the lead role requires she also play the Black Swan, a role she can't snag until she proves she can travel to her dark side. This is no easy task and her demons are haunting her every effort along with destructive forces in the form of her incredibly controlling mother (Barbara Hershey) and the French artistic director (Vincent Cassel) who tosses his former protégée (Winona Ryder) aside in favor of his new "conquest" Nina. Threatened by jealous competitors and falsely befriended by a less-experienced troupe member, Lily (Mila Kunis), Nina's undying efforts at pure unbridled perfection lead to doom as startling events begin to unfold in her life, making her (rightly) question her own sanity in the pursuit of excellence on stage.

Aronofsky was originally interested in doing a new take on Dostoevsky's The Double and when he saw a production of Swan Lake he knew he was onto something. The director, working from a screenplay by Mark Heyman, Andrew Heinz and John McLaughlin, has crafted a totally original look at a quest for nearly unachievable artistic expression and performance; in the process he has finally made sense out of the incoherent plot line of the classic ballet. Portman pulls off the difficult dancing with aplomb and infuses it with the confusion of a very mixed up young woman. Aronofsky conjures memories of everything from Repulsion to The Red Shoes to All About Eve and Mommie Dearest to Whatever Happened To Baby Jane—it's a gorgeous and macabre mind trip.

Portman, showing the benefits of years of dance training and a ten month training period, becomes a leading Oscar contender, but is matched every step of the way by the lively Kunis, a commanding and intense Cassel and a domineering and self-possessed Hershey. Ryder is in briefly but effectively as the booted ballet diva. Clint Mansell's score and re-orchestration of Swan Lake is top notch as is the extraordinary hand held camera work of Matthew Libatique, which gives ballet a cinematic reason to live for the first time.