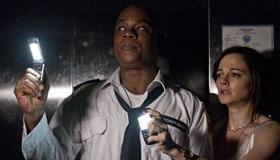 A Sunday school parable wrapped in an adequately nail-biting supernatural thriller, Devil uses its triteness to its advantage. Without a doubt, playing "Where's Lucifer?" with impresario/producer M. Night Shyamalan has been more frustrating in the past, as this project lacks the obfuscating wooliness that has so damaged his recent outings. Devil is content to be a genre picture and therefore its elementary nature can be forgiven. To boost the film's already decent prospects, Universal might have marketed it to church groups and Christian activists. It's safe enough to attend with your minister, rabbi or imam, not that his or her insights are necessary to untangle the narrative or its theological import.

The first in a series of tales dubbed "The Night Chronicles" that Shyamalan will conceive but let other filmmakers execute, Devil opens with a suicide in a downtown Philadelphia skyscraper, before trapping five strangers in one of the building's elevators. As the lights flicker and fail, these flawed souls are dispatched one by one while helpless security guards, including devoutly religious narrator Ramirez (Jacob Vargas) and a police detective (Chris Messina), watch. Thanks to his mother's detailed belief in demonic possession, only Ramirez has a firm grasp of what's going on.

Messina's copper is battling the bottle in the wake of his family's demise at the hands of a hit-and-run driver five years ago. Over breakfast on the morning in question, his AA sponsor tells him to be open to a higher power. Cue the modern-day, celluloid Milton and company, who are in our faces and eager to prove to a recovering alcoholic and an unbelieving world that supernatural forces are very real. Conventional crime-solving techniques and reason itself won't work in this case; it just has to play itself out.

The five nominees for Satan incarnate are a temp security guard with claustrophobia, a pushy older broad, a brunette in a killer business suit, a jokester salesman and a working-class hunk in a hoodie. All have major sins on their resumes, which revealed in due course. One or two innocent souls become victims as well, such as Dwight the doomed building engineer. But the mayhem is mostly confined to the lift and doesn't include anything too gory or shocking. There are a sufficient number of jolts thanks to quick edits and sound effects, plus the script's efficient structure.

Chris Messina gives a strong performance. Behind the camera, DP Tak Fujimoto acquits himself well at the outset, passing through an upside down cityscape and admiring the architecture before entering the high-rise at 333 Locust Street. Inside disabled elevator #6, however, it's all run-of-the-mill close-ups and blurry images via security cameras. Devil is not meant to be an exercise in technical inventiveness. And as far as its evangelical intentions go, at least its ecumenical proselytizing is upfront and not shrouded behind New Age nonsense.

We could do without the atmospheric disturbances (dark thunderclouds, rain and lightning). Wouldn't it be more interesting if all this took place on a bright, sunny day in the city of Brotherly Love? Still, to the dismay of rent-a-cops manning building lobbies throughout the country, expect more jitteriness than usual come Monday morning.