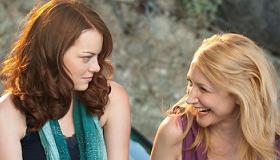 From the looks of things at Ojai North High School, not much has changed in the centuries since Hester Prynne scandalized her neighbors in Nathanial Hawthorne's The Scarlet Letter. At least that's what one student discovers in Will Gluck's pointed teen comedy when the rumor mill transforms her from one of the invisible kids to a notorious slut in about the time it takes to send a text. That the Toronto International Film Festival selected the film as one of its Special Presentations points to its quality. Overflowing with charm and wit, this satirical take on that special hell known as high school has plenty to appeal to teens and adults alike.

The Scarlet Letter just happens to be what Olive (Emma Stone) is reading for English class when a little white lie she tells her best friend about a date spins out of control. When Marianne (Amanda Bynes), the pious head of the Cross Your Heart Club, a Christian student group, overhears the conversation, she assumes the worst and starts dishing the dirt. Not one to shy away from controversy, Olive answers all the gossip by embracing her inner bad girl, at least outwardly; she adopts a sexy wardrobe and personally embroiders each piece with a bold, red "A." Her only pressing concern about her new reputation is what her favorite teacher, Mr. Griffith (Thomas Haden Church), and her classmate and old friend, Todd (Penn Badgely), might think of her.

This is one of those movies in which the lead character is so self-possessed, wise, well spoken and witty, that she sounds far too adult to be a teenager. To screenwriter Bert V. Royal's credit, he acknowledges in a flashback sequence when the 8th grade Todd (Braeden Lemasters) accuses the 8th grade Olive (Juliette Goglia) of sounding like a grownup. Olive agrees, but adds, "I'm not really as smart as I think I am." To make the preciousness more plausible still, Royal has also given her madcap parents, Rosemary (Patricia Clarkson) and Dill (Stanley Tucci), who serve up bon mots along with breakfast.

The Scarlet Letter parody is fresh and funny, but even better is the way Easy A pays homage to teen movies of yore, with a special emphasis on the cinema of John Hughes and a nod to Cameron Crowe. "Whatever happened to chivalry?" wonders Olive when her new rep attracts the wrong kind of attention. In her mind, Sir Lancelot's got nothing on the big-hearted, always true blue boys who populate movies like Sixteen Candles, The Breakfast Club and Say Anything. "I want my life to be like an '80s movie, preferably one with an awesome musical number for no apparent reason," Olive declares at one point.

Stone's voiceover animates much of Easy A, and that narration adds another layer, helping the actress create a full-bodied, extremely likable character in Olive. Clarkson, Tucci, Church and Badgely offer similarly complete performances. In the movie's one real weakness, the rest of the cast is stuck playing shallow stereotypes. Bynes and the rest of the Cross Your Heart Club, in particular, are ill-served by material that reduces their characters to cartoons. There is so much else to like about the film, though, that it is easy to overlook the flaws. This is a movie that is going to hang around in theaters for a while and seems destined to join the John Hughes' oeuvre in having a long, home video shelf life.