close
Dramatization of Allen Ginsberg’s poetry and the obscenity trial it inspired is at odds with itself because it doesn’t really trust the audience, or Ginsberg’s still powerful words 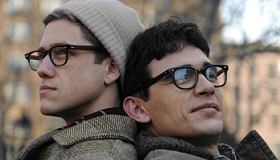 Howl, the new work from documentarians-turned-narrative filmmakers Rob Epstein and Jeffrey Friedman, is a film at odds with its own message. Simultaneously a biopic, a literary exegesis and a fact-based courtroom drama, Howl uses the 1957 obscenity trial over Lawrence Ferlinghetti's publication and sale of Allen Ginsberg's most famous poem as a framing device for a rumination on Ginsberg's life, art and the lasting legacy of the Beat Generation. It's an odd hodgepodge of an approach, and despite James Franco's subtle brilliance as Ginsberg, Howl can't escape coming off as a weird genetic mutation, a DNA splicing of Citizen Kane and the re-enactment aesthetic of some old E! True Hollywood Story.

More to the point, Epstein and Friedman lack the courage of their films expressed convictions. In the trial scenes, drawn from actual transcripts, the arguments they've elected to dramatize all focus on the inability of the observer to nail down artistic meaning in some literal, banal and quantifiable way. Much fun is made of David Strathairn's prosecuting attorney, Ralph McIntosh, for his Dragnet-like insistence on having Ginsberg's profane, surrealistic and semi-biographical imagery explained to him. McIntosh might have done better at court if he could have seen this movie, though, because, unbelievably, Epstein and Friedman have opted to illustrate Franco's excellent reading of Ginsberg's poem with cheap looking but Pixaresque CG animation sequences that force the audience to see everything the poem expresses in one singular and limited way.

If Franco as Ginsberg says he saw the best minds of his generation dragging themselves through the negro streets at dawn, then by jingo, we're going to see a forlorn figure dragging himself through the ragged streets at dawn. If the poem mentions fire or angels, there will be flame and humanoid creatures traveling through skies as beams of light. Weirdly, when the verse of the bard of homosexual openness speaks of sex, Howl always shows animated women copulating with animated men. By the time Howl gets around to representing Moloch, the Hebrew term associated with fire and sacrifice, as a Disneyesque monster with sharp metal teeth and a bull's snout and horns, it's enough to make the viewer want to howl back.

There are other debatable choices at work in this film. Ginsberg's Beat literature peers-Jack Kerouac, Neal Cassady and Ferlinghetti-are monosyllabic walk-ons in Howl's dramatizations of a story and a creative process they were central to. Even Kerouac's presence at Ginsberg's first reading, where his enthusiastic call and response chants of "GO!" in rhythm to Ginsberg's language gave the words an added aura of torrential momentum, is presented in oddly muted and incomplete terms.

The music choices are inappropriate and hilarious. When Ginsberg says "Jazz!" for the first time, the film defaults into the kind of over-produced Nelson Riddle bomp the Beats loathed, but which Jerry Lewis used to score his pictures to. The hard squawk of Bebop, which scratches its way through the cadence of nearly all Ginsberg's and Kerouac's works, is almost nowhere in evidence. Even at Ginsberg's historically important initial performance of "Howl," his voice has to fight through soundtrack treacle to be heard.

We hear it anyway, because of Franco's gracious and specific performance, and because the essence of Ginsberg's approach to language is that it was written less to be read than to be spoken and heard. Even disrupted needlessly by frenetic cross-cutting and reshuffled like greasy playing cards, the power of expression in the original verbiage comes through. It's just a pity Epstein and Friedman didn't trust the poetry and the audience more, and most of all, it's a pity they didn't trust the words.