close
Thank you, Joaquin, for almost joining us again 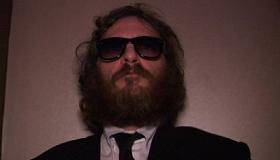 Is it real or is it a hoax? Did Joaquin Phoenix really retire from acting to take up hip hop music in 2008 or is it all part of an elaborate prank cooked up by the two-time Oscar nominee and his brother-in-law Casey Affleck in service to mockumentary "truth?" Smart money is on the latter option. As a piece of performance art, I'm Still Here is brilliant, often hilarious, but like so much performance art, also kind of annoying. Screening at the Toronto International Film Festival the same day it opens in the United States, the film is a riveting piece of cinematic theater that satirizes artistic pretension and celebrity culture. This is not exactly the Phoenix of Walk the Line and it's probably too insular to garner broad appeal, but it should attract a dedicated cult following.

The film begins with Phoenix complaining about his lot in life as an actor, a self-proclaimed "puppet," serving other artists' creativity. Slightly overweight and sporting an uncombed shock of hair and a full beard, the puppet analogy seems apt--since he resembles a Muppet. It isn't long after that bit of self-identification he announces to an Extra reporter at a San Francisco benefit that he is finished with acting. He is serious, he insists, about his music and he begins a quixotic quest to start a career, appearing at a few clubs where the reception is less than warm and trying to enlist Sean "P. Diddy" Combs to produce his record. (Diddy's response: "You're not ready to record with me.")

At the same time all of this is happening, Phoenix's "last" film, James Gray's Two Lovers is about to come out. Phoenix reluctantly attends to his promotional duties, confronting befuddled journalists during a press junket and making an infamous appearance on the David Letterman Show that led the host to comment, "Joaquin, I'm sorry you couldn't be here tonight."

Two Lovers went on to bomb at the box office despite a warm critical reception and you have to wonder how much of Phoenix's antics played into that? Phoenix, along with Affleck, is credited as a writer on I'm Still Here, and if he has any vanity, it is not in making himself look good. This is movie star as scary monster, ordering up whores and doing blow for the benefit of his brother-in-law's camera, making ridiculous demands of his ever-present flunkies (including insisting that one join him in making snow angels) and harboring seemingly endless wells of narcissism, insecurity and paranoia while demonstrating a commensurate lack of talent in his new musical endeavor.

The version of Phoenix put forth here is downright insufferable, and yet very, very funny. As a character he is extreme, a grandiose wild man who manages to be irritating and ingratiating at the exact same time. It is a performance that is both absurd and committed and ranks among his best. Do he and Affleck actually expect anyone to receive their movie as truth? They named their production company "They Are Going to Kill Us Productions," so we're guessing not. I'm Still Here does leave us with one big question mark: What will Phoenix do next? How will he top such a flamboyant caper?