close
Philip Seymour Hoffman triumphs on both sides of camera 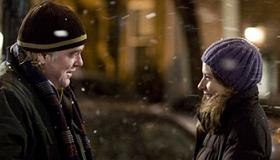 All the joys moviegoers and theater patrons have experienced watching actor Philip Seymour Hoffman perform is multiplied during his smart, sweet and emotionally rich, working class love story Jack Goes Boating. Hoffman is well experienced with the tale since he starred in the acclaimed stage play of the same name alongside John Ortiz and Daphne Rubin-Vega at New York's LAByrinth Theater Company. Instead of simply making a "staged" movie drama, Hoffman breathes cinematic life into playwright and screenwriter Bob Glaudini's story of average New Yorkers struggling to find love and happiness in their workaday lives. Collaborating with cameraman Mott Hupfel (The Savages), Hoffman makes beautiful use of the sidewalks and walk-ups that make up these people's lives. In the film's most beautiful sequences, Hoffman's character Jack learns to swim in order to be ready for a springtime date rowing boats in Central Park. In terms of visual dazzle, it's the highlight of the movie and confirms instantly that Hoffman is a director to celebrate. Scheduled for release September 17 from Overture Films, "Jack Goes Boating" premiered at the 2010 Sundance Film Festival and continues its awards consideration march with screenings at the 2010 Toronto International Film Festival. Response from festival audiences should only confirm what Overture Films executives learned some months ago. Jack Goes Boating is a specialty house crowd pleaser on par with their previous arthouse hit The Visitor, and Hoffman should be prepared for another round of acclaim; except this time, admirers will be discussing his directing work.

Jack (Hoffman) is a New York limo driver who wants to pass the entrance exam to work for the MTA. He also wants a relationship like the one enjoyed by his longtime friends Clyde (Ortiz) and Lucy (Rubin-Vega). Jack's chance at romance arrives when he meets a friend of Lucy's named Connie (Amy Ryan). Like Jack, Connie is also nervous when it comes to relationships. Still, with hard work, love may be possible.

Production Designer Thérèse Deprez, Art Director Matteo De Cosmo and Cameraman W. Mott Hupfel III make beautiful use of the film's multiple Brooklyn, Queens and Manhattan locations. Films like the Sex and the City movies tend to focus on Manhattan as a luxurious dreamland but Jack Goes Boating finds beauty in the city's blue-collar neighborhoods. Of course, it helps when a film has a cast every bit as diverse and vibrant as the city it's celebrating.

Ortiz and Rubin-Vega (Broadway's Rent) bring pizzazz and some heartache as Jack's devoted friends and relationship advisors. Jack is a character type Hoffman plays well: a loveless loser in the vein of the working-class Bronx butcher from the 1955 film Marty. But Hoffman also proves to be a solid romantic lead, especially in scenes when he takes cooking lessons in order to impress Connie with a gourmet dinner. Still, the most satisfying performance comes from the accomplished stage actress Amy Ryan (Gone Baby Gone) who matches Hoffman scene-by-scene.

Ryan deserves to be a high-profile leading lady and if Overture Films can market "Jack Goes Boating" with all the skill they used to release The Visitor, Ryan should get the attention she deserves.