Legend of the Guardians: The Owls of Ga'Hoole 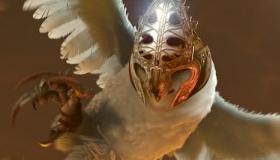 Based on the children's novel Guardians of Ga'Hoole by Kathryn Lasky, Legend of the Guardians: The Owls of Ga'Hoole follows in the mythic traditions of children's fantasy literature and offers audiences a Secret of Nimh for a new era ... this time starring owls. Fairly intense sequences of action, directed by 300 director Zach Snyder, remind you that the animals we're watching never cease to be ferocious raptors, meanwhile, the values demonstrated by the characters are genuine and easy to support. The fledgling hero journey of owlet Soren (Jim Sturgess), his kidnapping by a villainous owl cult and eventual transformation into a young leader, has the potential to do very well given its conventional narrative sensibilities, other limitations notwithstanding. Franchise potential is there but whether or not this American/Australian co-production does well in the states will dictate further export potential.

Soren and his brother Klydd (Ryan Kwanten) live in a hollow with their parents, younger sister Eglantine (Adrienne DeFaria) and Nursemaid Mrs. P (Miriam Margolyes). The team resembles (somewhat) Wendy, Nana and her brothers from Peter Pan, if they were owls. Why the raptors don't eat their nursemaid is anyone's guess, but the empathy implied by their affection for the reptile is immediately endearing and presents the birds as decent and kind-hearted. In the hollow, the owls tell stories about the Guardians; it's soothsaying more than anything else but the shared stories evidently comprise their culture and, perhaps also, religion. Their heroes are characters to believe in. When Soren and Kludd get to test their flying abilities, the fledglings are kidnapped by shaggy hunters humorously portrayed as poseur-punks (one with septum piercing, the other with dyed feathers) who talk seriously to each other about the convincingness of their posturing ("I call this stare "The Predator!" What do you think?"). These kidnappers bring the owlets to a Temple of Doom-styled harvesting space, where they'll extract metals that could be the key to villains' plan for domination. The good owls, those who live in a great tree in Ga'Hoole, are the only ones with the power to free the owlets enslaved by "The Pure Ones" (racially pointed implications, as well as allusions to the Third Reich, are largely glossed over).

Directorially, the film takes a few too many trips into prosaic slow motion. This seems necessary during the battle sequences because it's difficult enough to interpret the birds as they wrestle mid-air, but the slow motion doesn't provide a justifiable degree of clarity (or mood) to warrant its overuse. This difficulty with interpretation is apparent in other areas as well: the owls' facial features are not anthropomorphically explicit and this film doesn't provide them more human features (such would be cartoonish). Consequently, when they have emotions, it's a little hard to translate (i.e. "I think Soren just got mad."). Frankly the 3D, however well done, compounds the readability issue. Additionally, these owls are Australian. The cast (minus Helen Mirren who plays the Warrior Queen of the Pure Ones), all speak with assured down-under twang. As King's English is the more common voice of authority the voice actors, even the more stentorian of them, never really feel like The Powers That Be; their voices instead lend a feeling of foreignness. The most crystal authority is Mirren, but then, when is that not the case?

In sum, the film has the potential to be both a franchise and (in a throwback-y sort of way) a classic, particularly on DVD, but the question becomes: to what extent can an owl capture childrens' imaginations? Worth a try, anyway.