close
It’ll make you thirsty for it 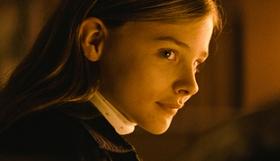 The Swedes are hot. With the best seller-turned movie The Girl With The Dragon Tattoo and its various sequels doing gangbuster arthouse business stateside, plus a Sony Americanized remake about to go into production with David Fincher at the helm and Daniel Craig starring, you would think that would be enough. But now 2008's critically acclaimed Swedish vampire flick, Let The Right One In has also spawned an American remake and--BREAKING NEWS--it's just as good as the original and, in some ways, even better. The story of a bullied young boy befriended by his 12 year old vampiric neighbor girl translates well and should bring gobs of additional attention to John Ajvide Lindqvist's best seller on which both versions are directly based. With embattled distributor Overture Films given a last minute reprieve plus marketing and distribution support from Ryan Kavanaugh's Releativity Media, the path should be clear for strong box office returns from youthful audiences who just can't get enough of bloodsuckers. The critical reception should also be swell.

Although the setting has been moved from Stockholm to Albuquerque, the story is basically the same. Owen (Kodi Smit-McPhee) is a shy social outcast who allows himself to be threatened and beaten up by three classmates who enjoy terrorizing him. Essentially a very lonely soul who lives with his single mom (Cara Buono), Owen strikes up a friendship with the mysterious Abby (Chloe Moretz), his new neighbor. What starts out as a typical adolescent relationship grows darker when a series of bloody happenings in town force Owen to face the fact that this girl isn't like any other. In fact, she has been 12 for a couple of hundred years and sucks blood for a living (literally). Along with her "father" (Richard Jenkins), the gruesome twosome fascinates Owen, who slowly begins to fall for Abby. She initially resists his budding interest but offers to help him in his fight against the school bullies. They have no idea what they are in for.

Though the Twilight saga has stolen some thunder from the public interest in youth oriented vampire stories, Let Me In earns special interest because it deals with a younger demo and blossoms into a tender and beautifully crafted coming of age story. In many ways, Let Me In updates Romeo And Juliet, with special attention paid to the foreboding darkness that surrounds the protagonists. Writer/director Matt Reeves creates an appropriate air of mystery and has cast the film brilliantly with The Road's McPhee and Kickass' standout Moretz, both of whom underplay most scenes just enough to make this relationship touching and believable. A scene in which Owen coyly asks Abby to go steady is a gem. Jenkins is also perfect as the elder vampire while the rest of the young performers seem totally authentic, with special praise for lead bully Dylan Minnette who, like all good villains, comes off as despicable.

Let Me In eclipses Twilight in every way, leaving you thirsty for more of this haunting, touching and unforgettable thriller.