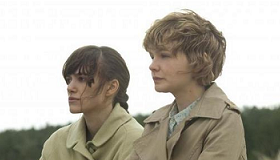 In our own world, we debate the ethics of stem cell research and endlessly argue over what should become of unwanted human embryos. In the universe of Never Let Me Go, Mark Romanek's adaptation of Kazuo Ishiguro's Booker Prize-nominated novel, society has moved past that to a world that unapologetically regards some humans as something less than others. For three young people (three points of a lifelong romantic triangle), that attitude has shattering implications. Screening at the Toronto International Film Festival just ahead of its US release, the drama boasts a stellar cast, exquisite performances and a tense atmosphere. It is a film that the author's fans and lovers of mature, measured storytelling will embrace, and that may be enough to keep it in theaters throughout the fall season.

As children, Kathy (Carey Mulligan), Tommy (Andrew Garfield) and Ruth (Keira Knightley) were raised to believe that they and their classmates at Hailsham were special. Miss Emily (Charlotte Rampling), the school's headmistress, exhorts them to guard their health, because their prime physical condition is one of the things that set them apart from other children. She and the other teachers also warn the kids of the dangers that lurk outside the school's bucolic grounds. Even when they learn the truth of their situation, they never rebel. They simply accept things as they are and concern themselves with the more pressing issue of their relationship, as shy, sweet Tommy bounces between the two girls.

The movie is science fiction in its outlines, but grounded by the reality of our own familiar era. It's an alternate universe in which science conquered most diseases by 1952 and average life expectancy exceeded 100 years by 1967. None of the children at Hailsham are aware of this in 1978, nor do they understand the purpose of the art they are directed to make for a mysterious gallery exhibit. As an adult, that art will take on talismanic dimensions for Tommy, convinced that it has the power to change his fate and the fate of his friends.

28 year old Kathy narrates the tale. Working as a caregiver who moves from hospital to hospital, she gives comfort to patients from what is essentially her own class (people the rest of society cannot get along without and yet who are regarded as kind of untouchables). It is through her work that Kathy once more meets her childhood friends, her love for Tommy as strong as ever.

In a more generic tale, this might have been an action movie with Kathy and her friends rebelling against their fate. But Ishiguro, and by extension screenwriter Alex Garland (Sunshine), are more interested in observing what happens when people more or less accept what destiny has dealt, as well as what it means to be human. From birth, Kathy, Ruth and Tommy represent a huge existential question mark, they're part of a caste system Miss Emily finds reasonable to wonder has souls.

Romanek, whose last feature was the 2002 Robin Williams thriller One Hour Photo, imbues the drama with a measured pace and a kind of muted dread, made even creepier within the context of the idyllic English countryside. This is an elegant production, but one that lives or dies on the strength of its characters and performances; it delivers on both counts. While Knightley is terrific in what is essentially a supporting role, what makes the film resonate are Mulligan and Garfield. There is both chemistry and contrast in their pairing; with Kathy reacting to their dilemma with quiet restraint while Tommy's emotionalism is never quite in check. Through their eyes, we grasp the horror of a situation at once far-fetched and only too imaginable.