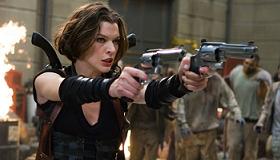 The Resident Evil franchise is something of an anomaly. Hollywood's history is littered with failed attempts at turning video game properties into movies, from Super Mario Bros. to Final Fantasy: The Spirits Within. Yet after four films, the Resident Evil series is running on fumes. Die-hard fans will only be mildly amused by this new installment, which means moviegoers who are new to the series will not be converted. Opening weekend receipts should be healthy, followed by a sharp decline and paltry sales on home-viewing platforms.

It is absolutely necessary to mention that Resident Evil was always envisioned as a 3D film. It's not a rushed conversion, and that makes a huge difference. Savvy moviegoers who complained about the murky visuals of Clash of the Titans in 3D will be thoroughly impressed by what they see in that regard. Afterlife is an action/horror hybrid, and those two genres are perfectly suited to 3D.

Unfortunately, the great 3D visuals are not backed up by a great story. Afterlife is a post-apocalyptic zombie flick featuring zombies that aren't very terrifying and doom-and-gloom vibes that lack any real edge. Fans of the video games may get a kick out of watching star Milla Jovovich gun down hordes of zombies, but that kind of mass killing creates a detachment that leads to zero suspense. The characters in Afterlife also don't seem to pine for the world they used to know; acceptance is boring when it comes to films about the end of the world.

Jovovich is on cruise control here and she fails to bring any kind of new life to a character that has been very good to her. The supporting cast is even worse. Jovovich's Alice character encounters a producer (Kim Coates), a struggling actress (Kacey Barnfield) and a former basketball superstar (Boris Kodjoe) on her hunt for a promised land called Arcadia. Clichés abound. Coates, Barnfield and Kodjoe fail to inject any spark of recognizable humanity into their limited roles. Plus, it requires a huge leap of faith to believe that those are the professions that would survive a huge viral outbreak that turns society into zombies.

Perhaps the most grating part of Afterlife is the techno rock soundtrack provided by tomandandy. Generic techno beats and crunching guitars come crashing into every action scene, providing distractions from the combat instead of support for it ... then again, techno seems to be the official soundtrack of the apocalypse. Should we really expect anything else from a film that doesn't make a single original choice outside of its visuals?