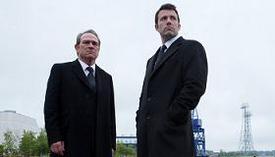 Films have punctured The American Dream before, but rarely so devastatingly as The Company Men does. Bobby Walker (Ben Affleck) is living the Dream: he has a wonderful job, lovely family and a shiny Porsche in the garage. When corporate downsizing leaves him and co-workers Phil Woodward (Chris Cooper) and Gene McClary (Tommy Lee Jones) jobless, the three men are forced to redefine their lives. ER veteran and television mainstay John Wells makes his big screen writing/directing debut with this timely, sardonic and at times harrowing drama which should benefit from positive word of mouth.

After airing at Sundance and then the American Film Festival in Deauville (France) John Wells' topical feature has earned plenty of critical buzz--and the positive vibes are not misplaced.

The three main characters attempt to survive after a devastating round of corporate layoffs. Wells reveals how losing their jobs affects their families, their psychological behavior and the community at large.

The screenplay captures the desolation of the current economic recession and how it is hitting the people who have mortgaged themselves to the hilt and depend on a regular paycheck to meet their commitments.

The three leading men (Ben Affleck, Tommy Lee Jones and Chris Cooper) all turn out robust performances. Their characters are well drawn and have the ring of truth. The supporting cast, including Craig T. Nelson, Kevin Costner, Maria Bello and Rosemarie DeWitt, acquit themselves with distinction. The characters are devastated not just by the loss of their jobs but also by the loss of their identity.

The script stands supreme, weaving the characters' stories, emotions and consequences together in a way that cannot help but have resonance to an audience. Jason Reitman's Up in the Air dealt with similar concerns, but The Company Men plows the familiar furrow with a quieter, less manufactured and more reasoned pitch.

Wells, when he introduced the film in Deauville, said: "One of the things we have to confront as a country is the question ‘what is The American Dream?' It's become having a 9000-square-foot house and possessing three cars."

Let his words be a stark warning to us all.