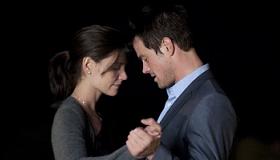 Katie Holmes receives top billing, playing a maid of honor who has feelings for her longtime friend's husband-to-be, in first-time director Galt Niederhoffer's polished adaptation of her chick lit novel The Romantics. Niederhoffer's wedding weekend comedy is just Holmes' second film in two years. While the 31 year old actress and celebrity wife of Tom Cruise continues to generate plenty of publicity for the indie comedy, she fails to deliver requisite laughs to keep the comedy afloat. Holmes may lead the film's impressively hip and audience-friendly ensemble cast but the standout performance belongs to True Blood's Anna Paquin as the snooty bride who may or may not lose her would-be husband to her friend and rival. After premiering at the 2010 Sundance Film Festival to mixed reviews, The Romantics, from Team Todd, Plum Pictures and Benaroya Pictures, begins its platform release in specialty cinemas September 10 via distribution from Four of a Kind and Paramount Famous Productions. Young moviegoers will respond to the film's Gossip Girl-like, blue blood characters and affluent backdrop of a stately seaside home. Of course, attracting sizable numbers of young moviegoers to arthouse cinemas remains a difficult challenge. Holmes and Paquin may appear in gossip columns daily for their personal lives and wardrobe choices but their online hits won't help The Romantics rise above a modest box office tally.

Old friends including Laura Rosan (Holmes) and Lila Hayes (Paquin) come together to celebrate Lila's wedding bliss and re-ignite old rivalries at the stunning seaside home of Lila's wealthy family. The friends still refer to themselves as the "Romantics" because they spent almost every waking moment together while classmates at Yale as well as dated each other. Laura is Lila's college roommate, close friend and constant competitor, especially when it comes to Lila's fiancé Tom McDevon (Josh Duhamel), who Lila stole from Laura many years ago. There are the promiscuous, drunken behavior and fights that take place at all wedding weekends. The friends are nostalgic about their college days but they do not want to be considered as "formerly" hot. Of course, Laura has only one thing on her mind: Does Tom still feel about her the way she still feels for him?

Holmes makes her second appearance in an indie comedy this year but she's been more successful elsewhere than here. She thrives in easygoing roles like "pretty woman at adjacent office cubicle" (Extra Man) or "cute collegiate with crush on professor" (Wonder Boys). Holmes struggles to capture all the anger and resentment in Laura, the outsider among her blue blood friends in The Romantics, but she has a hard time behaving badly.

Anna Paquin, best known as Sookie Stackhouse on HBO's acclaimed vampire drama True Blood, is dead-on as the anxious bride who refuses to let anyone, including a jittery groom, ruin her wedding weekend. Paquin sizzles with her overwhelming sense of entitlement and it's too bad that none of her bitchiness trickled over onto Holmes.

Candice Bergen strikes an emotional spark every time she appears onscreen as Lila's uptight mother. Her scenes with Paquin are the best in the film.

Josh Duhamel (When In Rome) and his handsome male costars, including Adam Brody (Cop Out) and Jeremy Strong (The Messenger) are stiff by comparison. In fact, Duhamel comes off so dull it's hard to imagine Laura and Lila continuing to fight over his affections. Only Elijah Wood comes off as funny as Lila's younger brother Chip, a funny drunk who can't hide his feeling for Laura.

Cameraman Sam Levy does not match his stunning work in the Michelle Williams drama Wendy and Lucy, but he comes very close. He makes the Hayes seaside retreat into arguably the most fascinating character of the movie. Costume designer Danielle Kays (Junebug) delivers both ugly bridesmaid dresses and a beautiful wedding gown for Paquin. Editor Jacob Craycroft (Joshua) keeps the story moving quickly past the many stumbling performances.

When The Romantics hits some second-act lulls, it becomes apparent that Niederhoffer loves her material too much. Perhaps, it would have been wiser for her directing debut to involve a story other than her own.

Kids Are All Right producer Four of a Kind Productions and Paramount Famous Productions (the made-for-home entertainment division of Paramount) will distribute The Romantics via a modest platform release beginning September 10. A marketing campaign in the fall catalog for J. Crew, put together by Holmes, an executive producer on the film, will bring some much-needed attention to the film's target audience of young women.

With mixed reviews likely and its would-be female fans more attuned to back-to-school activities and the new season of Gossip Girl, The Romantics will turn out to be a respectable first effort for Niderhoffer instead of a break out, specialty hit.

Still, Niderhoffer is already at work developing her first book Taxonomy of Barnacles with Team Todd with Warren Beatty in talks to star. Looks like the veteran producer plans to continue to divide her time on and off the director's chair.