close
How to lose friends and influence people 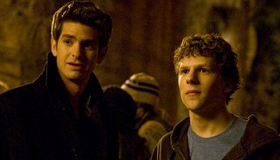 With a thieves den of borderline-Shakespearian characters, a wickedly literate screenplay, potent direction by David Fincher, an exceptional ensemble cast and subject matter that speaks to a generation and well beyond, The Social Network is mesmerizing. Never less than extraordinary, the film details the founding of Facebook and the legal and personal repercussions that began with the site's origin and blossomed as the thriving business grew to be worth $25 billion dollars. But as the movie so adroitly shows, success comes with a human toll that can't be counted in gigabytes. Confirm a smash hit among the young adopters of Facebook who make up the prime moviegoing audience. Also count on stellar reviews and lots of awards attention to bring in the older crowd who still thinks "tweets" are from a Looney Tune.

As socially significant to this generation as films like Network, All The President's Men and The Graduate were in their own time, Aaron Sorkin's stunning, biting and richly detailed screenplay (inspired by Ben Mezrich's book The Accidental Billionaires) trades on actual court depositions to frame the story of how Zuckerberg (Jesse Eisenberg) "created" what was then known as The Facebook, the social network that would later make My Space about as relevant as an eight track player. As Sorkin's script tells it, Zuckerberg was a petulant, impatient computer genius studying at Harvard when fellow students and twin brothers Cameron and Tyler Winklevoss (Armie Hammer and Josh Pence) came up with an idea to selectively meet girls and stay in touch with desired friends through a campus online connection service. The twins' plan needed a maestro, and they enlisted the brilliant Zuckerberg to create the codes to make it a reality. Six weeks go by before Mark finally tells them he has run into a snag. Meanwhile, with the help of his friend and now "CFO" Eduardo Saverin's (Andrew Garfield) $1,000 starter money, he's instead been working on his own variation of the idea, one that will create friction between friends, make new enemies, set lawsuits in motion and eventually change the face of the internet.

Fincher and Sorkin manage never to lose sight of the blistering human element at work here, despite the high tech canvas on which their tale is painted. Taking a business phenomenon that only had its beginnings in a dorm room in 2003 and bringing it full circle now, Social Network is a time honored, old fashioned yarn of naked ambition, restless genius, bald deception, betrayal and cold-hearted calculation, set against the succeed-at-all-cost mentality of today's cyberpreneurs.

Eisenberg is superb as Zuckerberg, perfectly capturing all the considerable contradictions and personality flaws of this impatient wunderkind. Garfield matches him scene-for-scene as the loyal friend and partner who's eventually screwed. Justin Timberlake is also ideal casting as the huckstering Napster founder, Sean Parker, who slyly seizes the opportunity to move in on the action. Armie Hammer, playing both Winklevoss twins (with the clever help of facial special effects and Josh Pence), is highly amusing. Among the large cast, Max Minghella and Rooney Mara are also standouts.

Shot digitally and handsomely by Jeff Cronenweth, sharply edited and containing a cool Trent Reznor and Atticus Ross score, Social Network is not what we'd typically expect from the prodigious talent of Fincher (Se7en, Zodiac, The Curious Case Of Benjamin Button). With Sorkin, Fincher has taken this compelling true story and given it drama and significance well beneath its surface to create a landmark masterwork and a must-see movie event.