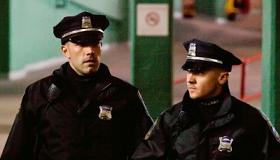 If Heat and The Departed had a baby, the result might come close to The Town, a riveting and explosive crime thriller and one of the year's best pictures. With pure, edge-of-your-seat filmmaking from first frame to last, Ben Affleck delivers on the bravura directorial talent he showed with Gone Baby Gone and rises to a new level of achievement both behind and in front of the camera. This taut story about a guy trying to get out of the criminal life into which he was born is loaded with action, but it's also so smartly written that a complex character study rests at its heart. Expect strong business from genre fans and upscale moviegoers alike once word of mouth gets out.

Based on Chuck Hogan's novel, "Prince Of Thieves" and set in Charlestown, Massachusettes, a one square mile neighborhood in Boston that is reportedly responsible for more bank and armored car robberies than anywhere else in America, Affleck plays Doug MacRay, leader of a band of local bank robbers who tried and failed to avoid following in his father's (Chris Cooper) own criminal past. This den of thieves is also a band of brothers. Deciding there would be one last job, things go wrong when Jem (Jeremy Renner), the loose cannon of the group, briefly takes Bank Manager Claire Kessey (Rebecca Hall) hostage. In order to make sure she didn't see anything, Doug finds a way to ingratiate himself to her post-robbery and takes her out, an act that leads to a strong attraction and a romance. Things get very complicated when his buddies spiral out of control. Shortly after, the FBI starts to track him, led by a determined agent Frawley (Jon Hamm) who begins using Claire to get to Doug and his gang.

Renner is superb, following his Oscar nominated work in The Hurt Locker with a high-pitched, edgy turn here. Hamm, leaving Don Draper far behind, is equally fine with steely resolve. Hall, Boston accent and all, is perfectly cast. There's great work in smaller roles from vets Cooper and Pete Postlewaite, a sort of Fagin to Doug and his gang.

Effortlessly taking this compelling fiction beyond the boundaries of a genre heist picture, Affleck, who also co-wrote with Peter Craig and Aaron Stockard, lets each of his actors create complicated characters who take the story in unexpected directions. Even the smaller roles, like Blake Lively's (Gossip Girl) unexpected turn as Jem's tough talking sister, are surprising and three-dimensional portraits etched in just a handful of scenes. At its heart is Affleck's Doug, a guy with great potential who never could get away from the influences of his neighborhood, family and friends. For him though, there's still hope even if, as Thomas Hardy once wrote, "the womb from which mankind emerged forever pulls one back." Particularly interesting is the cat and mouse game Doug plays with Frawley, always staying one step ahead in a bid to survive just like he always has. As a director, Affleck is expert at building tension and subtext even in the smallest circumstances and he proves he can handle action like the best of them. The Town is blessed with inventive chases and beautifully choreographed shootouts that do not in any way overwhelm the people at the center of this gripping drama.