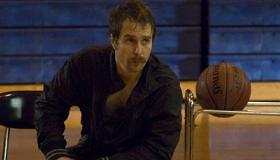 If you're going to make an underdog sports movie that clings for dear life to the clichés and story beats of every other underdog sports movie, you'd better have something pretty special up your sleeve to compensate. The Winning Season, James C. Strouse's comedic follow-up to his Iraq War drama Grace is Gone, has two. The first is Sam Rockwell as Bill, a sarcastic, hard drinking, deadbeat dad who's saddled with coaching a ragtag high school girls basketball team in a small Indiana town. The second is a natural sincerity that keeps his sour, Coach Buttermaker-style attitude from being an end unto itself. Despite having the girls basketball demo locked up, this comedy can look forward to low scoring theatrical returns, with Emma Roberts bringing in some teens and Rockwell possibly attracting adults willing to take a flier on another inspirational sports saga.

Sitting through The Winning Season you marvel at how it obsessively duplicates all such films that came before but still consistently thwarts your impulse to dismiss it out of hand. Strouse's real transgression is an inability to find a consistent tone. (Either make an entire film where it's appropriate for the main character to run around in body paint and a fright wig while being chased by police, or don't have him do that.) Strouse's wavering between indie and mainstream comedy sensibilities feels more like purposeful fence straddling than indecision or ignorance. Luckily, Rockwell charms us into giving the film the benefit of our many doubts. He finds that sweet spot where the comedy is (mostly) consistent with character and then drags everyone else along.

At the outset, Bill is a beaten man. Languishing as a restaurant busboy, he's estranged from his daughter, Molly (Shana Dowdeswell), and has a lousy relationship with his ex-wife. When friend and school principal Terry (Rob Corddry, pairing terrifically with Rockwell) offers him a chance to reclaim past hardwood glory by coaching the local high school girls varsity basketball team, Bill is reluctant. Thinking twice, he pulls the framed photo of Indiana coach Bob Knight off the restaurant wall and hits the road to redemption. Initially, Bill is no fan of the team he has inherited and the team is no fan of Bill. These young ladies are terrible players (one spends the entire season sitting out with a broken foot) and, even more troublesome, they're American teenagers. Strouse assigns some of the girls personal problems involving sexual identity and cultural assimilation, left-leaning issues that become the film's most manufactured moments. Team huddles involve fretting over global warming and demanding their coach is less dismissive of the competition because "that's the attitude that causes girls to have eating disorders." In a later credulity-stretching scene, an opposing player calls Bill's sole Latina player (Emily Rios) a racial epithet causing an on-court riot. We get the overarching point. The team is bonding and learning to work together while Bill is developing a relationship with the girls he can't have with his own daughter, who happens to play varsity hoops at a rival high school. Strouse's approach, helped by DP Frank DeMarco's faded small town colors, is a genuine attempt to slyly address serious teen issues without getting too serious about them. The most affecting moments, though, come from an unlikely source: Margo Martindale (brilliant in Alexander Payne's contribution to Paris, je t'aime) who infuses the supporting role of the team's ill-prepared assistant coach with an unexpected degree of emotion.

If Bill's players have seen even one sports movie, they know that sports movie coaches are a prickly, difficult bunch. They're always master strategists, but that comes with a price. Either they lack social graces or they have a troubled past that the team helps them confront and move beyond. Rockwell is a whip smart actor so he never plays the character strictly for snark and he never asks for the audience's sympathy. In terms of the former, the potential surely was there. Consistently pissy, Bill swears at the girls, treats them condescendingly and blows smoke rings in their direction. He hates himself, yet we never hate him. We do, however, hate the inevitable, climactic Big Game, which Bill coaches from outside the gymnasium because he's been fired. It's the film's worst passage. Fortunately, we've already bought into Strause's truthful, if not entirely cohesive, plan for these characters, so everyone earns whatever victories, on or off the court, they get. It may not be as cathartically vicious as the original Bad News Bears or as rousingly silly as Dodgeball but it finds its own way and succeeds on those terms.