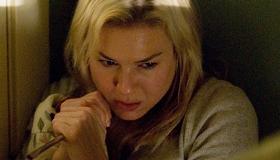 Renee Zellweger is a game performer, but the Oscar winner's charm and talent are wasted in Case 39, a mess of a horror movie that spent several years sitting on a shelf and should have remained there living up to its fullest potential as a dust magnet. The latest in the Demon Seed/Exorcist/Omen line of evil tyke movies, this one involves a social worker who brings an apparently abused, seemingly sweet 10 year old into her home with horrific and completely predictable results. Horror buffs will find this laughable while the star's fan base is unlikely to follow her into this detour into the outré. Expect anemic ticket sales.

The problem as Edward Sullivan (Callum Keith Rennie) sees it is, "You can't let her go. You can't let her stay." By the time he explains the essential dilemma behind life with his daughter, Lilith (Jodelle Ferland), to social worker Emily Jenkins (Zellweger), he and his wife are awaiting trial for trying to kill the wan little girl and Emily has brought the child into her home. Drowning in a sea of active cases, Emily originally had no interest in this, her 39th, but her heart so goes out to the child that she volunteers to keep her until a foster home can be found. Emily's cop friend, Detective Barron (Ian McShane), thinks the kid is a liar and manipulator, and she creeps out her therapist, Emily's boyfriend Doug (Bradley Cooper). Slowly, Emily begins to understand what would make parents install deadbolts on their bedroom door and hatch a plot to murder their kid.

Across the board the performances are first rate, starting with Ferland, who is convincing both as a sweet child in need of rescue and as something far more malevolent. She's especially effective in a session with Doug where, without doing much more than adopting a disdainful tone and employing words outside a normal 10 year old's vocabulary, she suggests the evil lurking beneath her girlish exterior. In those moments, when Case 39 approaches psychological drama instead of horror, it becomes a much better movie. There is something unsettling about this kid and nearly every adult who comes in contact with her senses it sooner or later.

Unfortunately, those moments are few. The silliness of the demonic possession plot is there almost from the beginning. Scenes clearly meant to scare instead inspire laughs and the outcome is too glaringly obvious to engender much suspense. Instead of wondering whether Emily will survive or not and whether evil will triumph, audiences will be left scratching their heads wondering what compelled Zellweger to take this particular part. Did some demon whisper in her ear with bad career advice?