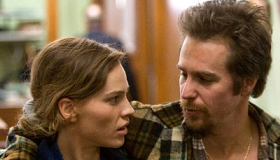 After crash landing at the box office last fall in the period piece Amelia, Hilary Swank returns on safer ground, playing the kind of character she usually gets Oscars for in Conviction. This is the remarkable true story of Betty Anne Waters (played by Swank), a woman who puts herself through high school, college and finally law school on an 18 year journey to free her imprisoned brother. Despite some of the trappings of a television movie, this extraordinary tale of Waters' undying quest is undeniably gripping and should earn strong word of mouth once it opens in October. Good box office and a sweet hereafter on DVD are assured with possible awards prospects, particularly in acting categories.

"Incredible" is a much overused word in movie descriptions, but it's almost an understatement when describing the near 20 year obsession of Betty Anne Waters, the Massachusetts wife and mother of two who launched a single-minded effort to clear her brother, Kenny (Sam Rockwell), of murder charges after he was given a life sentence in 1983. Absolutely convinced of his innocence and mistreatment by the local justice, she sets about engaging legal help to gain his freedom. After striking out with conventional methods this fairly uneducated woman gets high school, college and law degrees over the course of several years in order to represent her sibling and find her own path to getting him out of the slammer. Along the way, her best friend, Abra Rice (Minnie Driver), gives her lively help and together they make their way through mounds of so-called "evidence" compiled by the presiding careless cop, Nancy Taylor (Melissa Leo). Slowly retracing all the steps that led to his arrest, Betty Anne uncovers some startling details while utilizing improved DNA tests to try and free Kenny once and for all.

Tony Goldwyn's assured direction, based on a well-researched and compelling script by Pamela Gray, lets Waters' amazing story speak for itself in fine, uncluttered dramatic fashion. Lifted out of the staid Movie of the Week traps to which it could have fallen prey, the blandly titled Conviction benefits from a top drawer cast in ace form, beginning with Swank who is always most effective when portraying unextraordinary women fighting against all odds to succeed. She is completely convincing as the determined sister who will stop at nothing to clear her brother and, in the process she delivers her finest screen work since her Oscar winning turn in Million Dollar Baby. The undervalued but always great Rockwell is also outstanding. Driver lifts the film whenever she's on and there's a killer scene with Juliette Lewis, terrific as a potential key witness. Leo is all-pro as usual.

Conviction is a stirring, unforgettable motion picture experience, a superbly acted and courageous story of one woman who made a difference. It deserves to be seen.