close
Boden and Fleck are clearly a gifted pair, but not when it comes to humor

It's Kind of a Funny Story 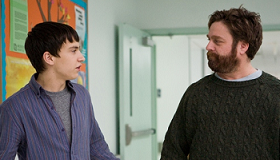 The third time is charmless for writers/directors Anna Boden and Ryan Fleck. With their adaptation of Ned Vizzini's young adult novel about a teenager's adventures in a locked mental ward, they step away from the resonant, character-driven drama of Half Nelson and Sugar into the realm of dramedy. These two most earnest of filmmakers are flummoxed by the demands of humor and despite the presence of a gifted cast headed by Keir Gilchrist and Zach Galifianakis, It's Kind of a Funny Story isn't very funny or much fun at all. Arriving in theaters a month after its world premiere at the Toronto International Film Festival with Focus Features' muscle behind it and the ever hotter Galifianakis' name on the marquee, this misfire may still make waves (however minor ones) at the megaplex.

It's Rocket Science meets One Flew Over the Cuckoo's Nest when stressed teen Craig (Gilchrist) gets himself committed to a locked New York mental ward after confessing to thoughts of suicide. With the adolescents' wing of the hospital under renovation, kids are thrown with the adults, so while Craig meets lovely, depressed cutter Noelle (Emma Roberts), a girl his own age, he's also thrown in with the likes of Bobby (Galifianakis) whose outward bonhomie hides a deeply troubled soul. Most of the patients are more eccentric, including a former professor (Novella Nelson) with paranoid delusions, a Hasidic acid casualty (Daniel London) and Muqtada (Bernard White), Craig's despairing and deeply antisocial new roommate. It's a week of revelations for Craig, not just because he gets to view his youthful angst in comparison to people with real problems, but also because this boy who strived to get into the prestigious Executive Pre-Professional High School discovers art and music.

Once again, Boden and Fleck prove themselves gifted when it comes to directing actors. Down to the smallest role, the performances are terrific and that could not have been easy because, given the exceptions of Craig and Bobby, the characters are pretty much caricatures. These are human cartoons with tics, not people. Also, like Craig, Boden and Fleck are strivers, this time out to pay homage to the late John Hughes, right down to a musical number plopped into the middle of the movie for no particular reason. This is the second film in less than a month to take its cues from Hughes, but where Easy A (the previous film to homage Hughes) was buoyant and assured, It's Kind of a Funny Story is leaden, its mix of comedy and drama uneasy.

Mental illness and locked wards are hard to get right in a comic setting. For every Harvey, there are far too many Crazy Peoples. It's Kind of a Funny Story is not as big a disaster as that Dudley Moore vehicle; it's heart is in the right place, at least. But with a pair of filmmakers uncomfortable with the nature of comedy and a story that works better on the page than on screen, a movie that struggles for laughs was inevitable.