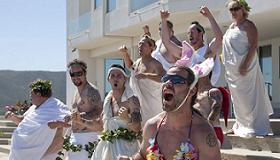 A bull, a ram and three buffalo walk into a bar - okay, that's not really a joke, but after encountering Johnny Knoxville, Bam Margera, Steve-O and the rest of the Jackass crew, those animals probably could use a drink. The amiable doofuses whose passion for extreme and extremely stupid stunts is matched by their love for the scatological are back, and this time in 3D. The laughs are a little uneven and director Jeff Tremaine does not always take full advantage of the 3D technology, but the movie has enough going for it to satisfy Jackass' legions of fans and make some new ones. Ticket sales will be robust.

After an opening that introduces all the players and curiously calls to mind both John Waters and Jean Genet (okay, maybe not so curiously since these guys take bromance to a whole other level) the action begins in earnest. Call it the good, the bad and the gnarly. Luckily, not too much can be classified as bad, mainly the breaks they take from the stunts to indulge in a little bit of candid camera, bar fighting (featuring Jason "Wee Man" Acuña) and crude "old man" sequences, but those are strictly filler material and kind of dull.

Far more is good, at least among those of us willing to indulge our inner 12 year old boy and admit that it's funny watching people go to absurd and sometimes death-defying lengths just to get a laugh. Some of it is downright inspired. "Bee tetherball" is exactly that, Steve-O and Dave England batting around a hive, dressed as go-go bears (not sure how else to describe a costume that consists of a furry bikini bottom and a bear cub hat). England's growing panic adds to the hilarity. (Yes, this is the cinema of cruelty.) The entire cast has fun experimenting with what can happen when a person stands behind a revving jet engine and what can happen to the stuff thrown at him. A Knoxville solo moment in the spotlight is a standout. Dressed like a college letterman, standing on roller skates, he does exactly what the soundtrack tune Roger Miller's "You Can't Roller Skate in a Buffalo Herd" says he can't do, the grin never leaving his face as the buffalo advance on him.

Then there's the gnarly...this is when it gets dicey recommending the movie to anyone who says "I like gross out humor" before they know what they are actually talking about. There are some skits simply designed to turn the average person's stomach, one involving a model train, another featuring a "sweat cocktail" and the ultimate gross-out gag, the "poo cocktail," involving Steve-O, a port-a-potty and one outrageous stunt. Serial vomiting among the cast and crew tends to accompany these skits, adding to the revolting quality.
Is Jackass 3D stupid? Well yeah, and deliberately so. But it's also hilarious enough in its best scenes to make up for the slack moments and the nausea.