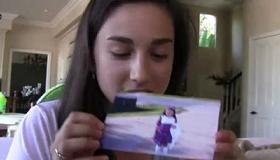 As semi-spooky and splatter-free as its predecessor, Paranormal Activity 2 has to overcome the inherent tedium of its low-budget, security-cam methodology so the mundane doesn't eclipse the occult. Being fuller and better made that the first, 2 succeeds, though the paranormal is still in danger of seeming harmlessly quotidian. Separating the marketing campaign from the movie itself is less difficult than it was the first time around, yet this flick is in an even better position to demonstrate the triumph of social media algorithms over traditional ways of luring audiences into the multiplex. The main countervailing forces: the absence of novelty and the element of surprise.

Paranormal Activity 2 serves as both a sequel and a prequel, and the team Oren Peli has assembled deserves credit for beefing up and rounding out his original narrative without letting it mutate into something unrecognizable. Aside from the photographic point of view, the main commonality is the character of Katie (Katie Featherston). At the outset, her sister Kristy (Sprague Grayden) is seen arriving home from the hospital with her newborn, Hunter, and husband, Daniel Rey (Brian Boland). The welcoming committee at the Rey's nicely appointed Carlsbad casa in northern San Diego County includes Hispanic Nanny, Martine (Vivis), Dan's teenaged daughter from a previous marriage, Ali (Molly Ephraim), and the family's faithful German Sheppard.

Like her father and stepmother, Ali is borderline obsessed with videotaping everyday events, in addition to momentous occasions like Hunter's arrival home. The latter footage orients the audience and sets a scene of domestic harmony. (By movie's end, you'll feel like you know every inch of this comfortable home.) About one year later, Aunt Katie comes over for a BBQ (grab the videocam!). Her visit is followed by the story's first unnerving event: the house is thoroughly ransacked by intruders with no interest in thievery, except for a necklace Katie had given her sister. This violation prompts Kristy and Dan to have a security system installed, and so at around ten minutes into Paranormal Activity 2 we adapt to the signature fly-on-the-wall perspective and most of what follows is seen through these cameras or via video attempts to document the eerie goings-on or the characters attempts to distract one another from them.

What spoils the purity of the spy cam footage is that titles are put on the screen, as in "Night #1 August 7, 2006." There'll be 19 nights in all. The desired transmission of information and sense of chronology could have been accomplished with more elaborate time stamps and without blowing the premise that we're watching found footage. In any case, it quickly becomes obvious that the Rey house is haunted and that the responsible demons are focused on little Hunter. Martine is clued in from the get-go, which causes friction with her employers. At one point, Katie's live-in boyfriend, Micah, comes over and we're told in a title card that his days are numbered-he's got 60 more to be precise. As the August days and nights tick by first Katie and then Ali become convinced they're not alone. Like Martine, the protective dog and little Hunter have been aware of spirits all along. Dan, who owns Burger King franchises, is the lone skeptic. Needless to say, things escalate in such a way that he's eventually convinced. His dream of domestic bliss, built on fast-food lucre and a wife with nothing occult-related in her background, is shattered.

The early-to-middle frights are mostly achieved with loud sound effects as our sense of anticipation and the sense of dread slowly and steadily mounts. Once things get going, director Tod Williams and his techies are able to achieve some chilling moments, with the climactic scenes delivering a fairly riveting payoff. It just feels like it takes an awful long time to get there. It's unclear why the security tapes begin to fast-forward during the pic's third reel; and when it becomes apparent that it's the filmmakers and not the demons that are speeding things up, you wonder why they couldn't have begun the manipulation sooner.

Michael R. Perry and his co-scenarists notion of a Faustian bargain that jeopardizes an innocent soul is serviceable enough, if not especially fresh. Overall, a sense of plausibility is more pertinent here than it is in your average horror flick. Alas, the psychological dimension feels skimmed over, despite incidental scenes that try to tease out the meaning of events but are really filler. Because this lack can't simply be attributed to the limits of the movie's format, you have to conclude that Paranormal Activity 2 is more interesting as a marketing phenomenon than a cinematic one. It ends up somewhere between a full-throated fright fest and a penetrating psychological thriller.