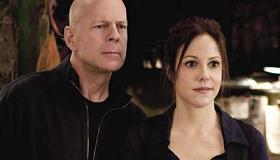 Being old isn't fun, but movies where a group of old people gather together for one last adventure can be lots of fun. Clint Eastwood's Space Cowboys and Martin Brest's 1979 comedy Going in Style, for example, are terrific. Then there's Red, in which 65 year old Helen Mirren and 73 year old Morgan Freeman play retired CIA agents who reteam after being targeted for assassination. It's gutsy to hand a modern action film to an AARP-ready cast, but if director Robert Schwentke really had guts, 56 year old John Malkovich would act 56 years old and the anemic script would find clever ways for our heroes to overcome their age disadvantage. Instead, bets are hedged with generic action and the casting of Bruce Willis, an actor whose only acknowledgments of aging have come with a wink, a nod and a forearm to the face. Red tries to have it both ways, then, and gets little of it right. Summit Entertainment should see okay theatrical numbers, followed by robust ancillary.

Red is based on a graphic novel, which doesn't mean much anymore because everything is based on a graphic novel. Someday there'll be a graphic novel based on another graphic novel and both graphic novels will result in terrible movies. Here, the Warren Ellis and Cully Hamner original is fatally compromised in the adaptation by sibling screenwriters Erich and Jon Hoeber, who also adapted the graphic novel Whiteout, making for an almost elegant circle of failure. The brothers (whose latest credit is the WTF?! adaptation of the board game Battleship) have little feel for crafting believable relationships, which becomes evident as the film's central coupling is introduced. Frank Moses (Willis) is a retired Black Ops super spy for the CIA whose only respite from loneliness is talking on the phone to far-away pension services operator Sarah (Mary-Louise Parker). Frank's boring and lonely life gets a surprise jumpstart when he's ambushed by a cadre of assassins, barely escaping to Kansas City to rescue Sarah. It's a credit to Parker that she plays her underwritten role with hushed amazement and lip-biting sexual interest when others would have played it shrill and scared. After this initial set-up, though, Schwentke almost completely neglects their blossoming love in favor of Frank and Sarah driving around the country rounding up his old CIA buddies to discover why a pensioner is suddenly marked for death.

In a better movie, you'd chuckle at the ingenuity with which a 73 year old retiree turns back his pursuers, lead by CIA whippersnapper William (a stern Karl Urban). Figuring out ingenious ways for the group to use their old school training and hard earned wisdom to avoid death is, alas, too much work for this movie. That's what guns are for, so the fight scenes are mostly point and shoot, although it's rather sweet that we're expected to deem the sight of a nice older lady like Helen Mirren firing an enormous machine gun as cool. Schwentke (Flightplan) is not above the Zach Snyder-esque visual orgasms that have become the default style of fanboy filmmaking. Yet here the effects feel tacked on, like a lame attempt to jazz up a film that lacks zip (admittedly, there's a slick moment in which Willis steps out of his car as it spins out). The real sparkle comes from Malkovich as Marvin Boggs, a conspiracy-minded paranoiac living in an underground bunker that can only be accessed through a hollowed-out car. Whatever movie Malkovich feels he's acting in is more satisfying than the one we're watching, furthering his reputation for putting a whacked-out charge into any supporting role. Mirren and Freeman add measures of grace and gravitas to counterbalance Malkovich and Willis. Mirren especially harkens back to the bad old days of Cold War double-crossing when she's forced to revisit a long-ago affair with a Russian spy (the ever-awesome Brian Cox).

No one is expected to take any of this seriously, so Schwentke keeps things light: light on big laughs, light on unique action set pieces and light on any sense that these game but retired spies are too old for this crap. And the larger the story gets (eventually the Vice President of the United States gets looped in), the further it drifts from what we should be caring about: the characters and the comedy. It's too bad. After the failure of The A-Team¸ here was an opportunity for more seasoned pros to show the kids how it's done. Schwentke blew that chance with this forgettable comedy. If he feels the need, maybe he can brag about his ability to take a stellar cast and put them in a thoroughly pedestrian film.